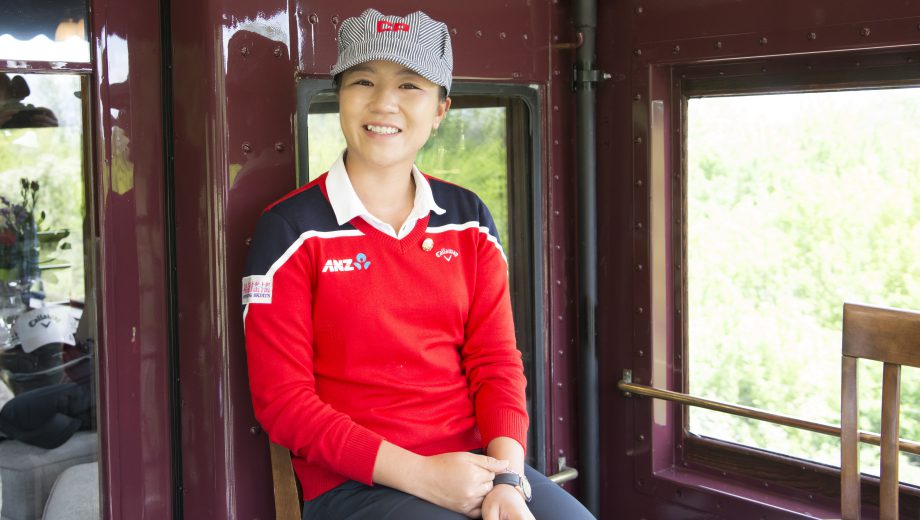 There is a rhythm, a tempo, to the sway of a regal train, particularly one grand enough to have carried Winston Churchill, Queen Elizabeth and other assorted royalty, dignitaries and celebrities, that the most successful, the most consistent of golfers can appreciate.

“Blue sugar!’’ laughs Lydia Ko, setting eyes on the icing of a mini-cupcake as a small lunch plate of salami, prosciutto and a mini-burger is dropped on the table.

“Where did they get that?”

There’s something comforting, even disarming, in seeing the world’s No. 1 female golfer, winner of 12 LPGA tournaments, including two majors, and over $5.9 million in career prize money, still being able to get charged up over something as you-and-me mundane as a dollop of blue icing.

Just an everyday, ordinary teenager jacked by a sugar overload.

Ko, of course, is anything but ordinary. She is, in actuality, a prodigy, in her field what Mozart was to a fortepiano or Bobby Fischer to a chess board.

The youngest-ever player to win a professional tournament, woman or man [a record since bettered by Canadian sensation Brooke Henderson];

Aboard the fabled Royal Canadian Pacific on this day, though, promoting the CP Women’s Open at Priddis Greens Golf Club outside Calgary, August 22nd to 28th, she’s not the woman to beat each and every weekend or a role model/idol to a new generation of ball-strikers, but a 19-year-old snapping selfies to post, kibitzing with her mom and sister.

Ko’s Canadian ties stretch back almost to the beginning. Her family immigrated to New Zealand from Seoul, South Korea when she was six years old. Raised in Albany, N.Z. and now living in North Harbour, the family very nearly relocated to Ontario.

“My sister was studying in Toronto at the time,’’ she’s explaining over the click-clack, click-clack of the Royal Canadian Pacific steaming down the tracks. “Our family was actually planning on moving to Canada but some little issues came up so we ended up going to New Zealand. Maybe that connection of me almost living in Canada might be a little spark that happens (when she plays here).”

Someone should really make her an honorary Canadian.

As a 15-year-old amateur Ko gobsmacked the golf world at the Vancouver Golf Club, winning the CN Canadian Open by three shots over Inbee Park. She defended that title, again as an amateur, at the Royal Mayfair in Edmonton a year later, then returning to the scene of her B.C. triumph last fall and chalking up a third, besting American Stacy Lewis in a playoff.

No wonder she’s developed a love-in with this land.

“Coming to play in that first Canadian Open, it was two weeks after I won the U.S. Amateur. As an amateur you always dream of winning that tournament.

“So afterwards I was so emotional, so happy. I think it took me a couple days to settle down a little bit. Christina Kim ran up to me and said ‘Hey, congratulations on the win.’ And that’s when I felt,’ Hey how amazing is this sport?’

For someone so young, the expectations people have for her are mighty; the bar she herself has set, dizzying.

“There is pressure and stress, especially the higher you go,’’ she admits. “But if it’s not fun, it’s not worth it. You’ve got to have fun to have a long career. And golf is a sport where you can play for a long time. And there’s so much more than the results and the trophies.”

“To be honest, when I was 15 or 14, I did say ‘Hey, I want to go out on a Friday night and, you know, watch a movie with my friends or have a sleepover.’ Now I’m learning you get these rewards afterwards. After our season finale, I go to Korea. Last year I went on a three-four day trip with my friends. Just us.”

“The younger you are, you’re really in the moment, you want what you want and you want it right then. I still do, but I’m slowly learning that at the end of the season, you can enjoy all these things. Go to concerts, etc., etc. I’m having this experience of a lifetime being here, in Calgary, from a small-town in New Zealand. I’m going all over the world, seeing all these places, meeting all kinds of people.”

That balance, between being a happy teenager and the world’s best at what she does, is a

At 19, most kids are still trying to figure out how to parallel park properly.

“She played well in amateurs. She’s used to the attention. But not so many tournaments. I’m trying to get her to skip a tournament. But she says ‘I’m a professional. I can’t take a week off because I’m tired.’

“I don’t know what’s happening inside her but she feels pressure, at almost every tournament. She thinks she has to play well, better, best. I tell her ‘You don’t need to get stressed. Relax.’ But it doesn’t help sometimes.”

Like most kids, Ko loves sports, one of her passions being the NBA’s Golden State Warriors. The night she arrived in Calgary, the Warriors played Game 7 of their semi-final series against Oklahoma.

“On the flight from Minneapolis to here there was no TV. None of those little screens. I was getting excited so I decided to sleep through the last two-and-a-half hour flight. When I got off the plane there was like 14 minutes to go so I was refreshing my Twitter account every single minute.”

“I was getting so nervous. I was trying to refresh, refresh. You’re not allowed to have your phones on around customs but fortunately the game just finished before I got there. What a comeback. For them to be down two and win the next three games. It was a lot of fun just to refresh the Twitter. I think I would’ve gone crazy if I was actually watching it.”

Imagine. Already tied with Hall of Famers Meg Mallon and Pat Bradley for most Canadian Open wins in a career. And not yet 20. With the chance to move on top, alone, three weeks into August just outside Calgary.

Lydia Ko may hold a foreign passport and live 13,000 kilometres away, but in a staggeringly short period of time this honorary citizen has written a Canadian sporting history that Pierre Berton would appreciate.

“As I said, playing in Canada is like being home for me,’’ she says. “I feel comfortable here. I feel the support here. Winning this tournament again … it would be … would be …Pretty sweet.”

Every bit as sweet, perhaps, as a dollop of blue icing sugar atop a mini-cupcake.