Honouring a Canadian legend: A tribute to the late Dawn Coe-Jones 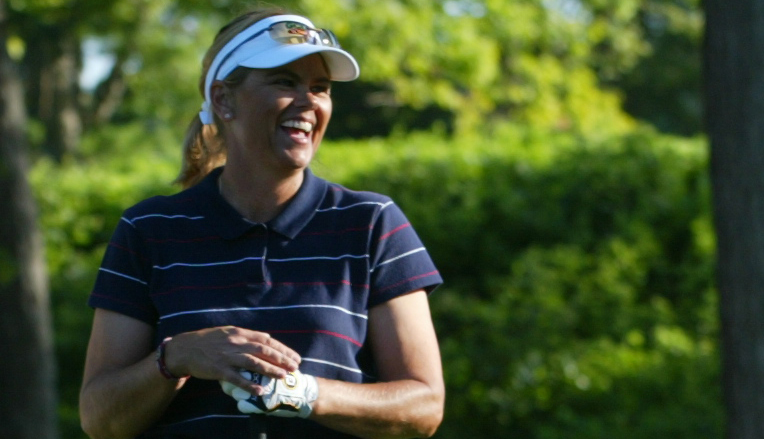 Those are the initials of Dawn Coe-Jones, one of Canada’s most outstanding golfers who died of bone cancer last November at the age of 56. The ribbons are to honour her memory and to remind us all of the toll this terrible disease takes.

Born in Lake Cowichan, B.C., Coe-Jones won the B.C. Junior Championship in 1978 and 1979 and then the B.C. Amateur in 1982. In 1983, she defended her provincial amateur title and capped off the season by winning the Canadian Amateur Championship. After being named an NCAA All-American at Lamar University in Texas, Coe-Jones headed to the LPGA Tour where she won three times, including the 1995 Tournament of Champions.

Despite smaller purses during her heyday, Coe-Jones remains the top Canadian money-winner at the CP Women’s Open. She finished, either solo or tied, as the top Canadian 13 times. Her best finish was third in 1993. Her golfing genes live on in her son, Jimmy, who played in the Canadian Amateur earlier this month.

Last October, the inaugural Dawn Coe-Jones Golf Classic was held in Florida to raise funds for sarcoma research. “Dawn touched so many people,” recalled fellow B.C. native Gail Graham, a fellow Lamar alumna who played with Coe-Jones on the LPGA Tour. “She was always the one who worried about others.”

That month, the Legends Tour (the official senior tour of the LPGA) honoured her with the Colleen Walker Spirit Award, given to the player who best exemplifies Walker’s spirit, courage and love of the game. The award is named for Walker, a former LPGA Tour player who died of cancer in 2012.

Coe-Jones’s legacy is also being carried on by the current generation of outstanding Canadians, many of whom are participating in this week’s championship.

The homegrown contingent is led by 19-year-old Brooke Henderson, already a four-time winner in only her second full season on the LPGA Tour, including the 2016 KPMG PGA Championship. Henderson, who was born in nearby Smiths Falls, Ont., now calls the Ottawa Hunt and Golf Club her home club, so she has local knowledge on her side as well as talent.

Also vying to be the first Canadian to win our national women’s Open since Jocelyne Bourassa in 1973 will be Alena Sharp of Hamilton, Ont. Sharp, who represented Canada in the 2016 Olympics, is coming off a top-five finish at last year’s CP Women’s Open.

Charlottetown’s Lorie Kane, like her longtime friend and competitor Coe-Jones, is an honoured member of the Canadian Golf Hall of Fame. She will be teeing it up this week in her record-setting 27th CP Women’s Open start.

No doubt all of them have derived inspiration from the successes, both professional and personal, of Dawn Coe-Jones.

So when you notice those yellow ribbons this week, take a moment to remember DCJ and her legacy not only to golf, but to cancer research.