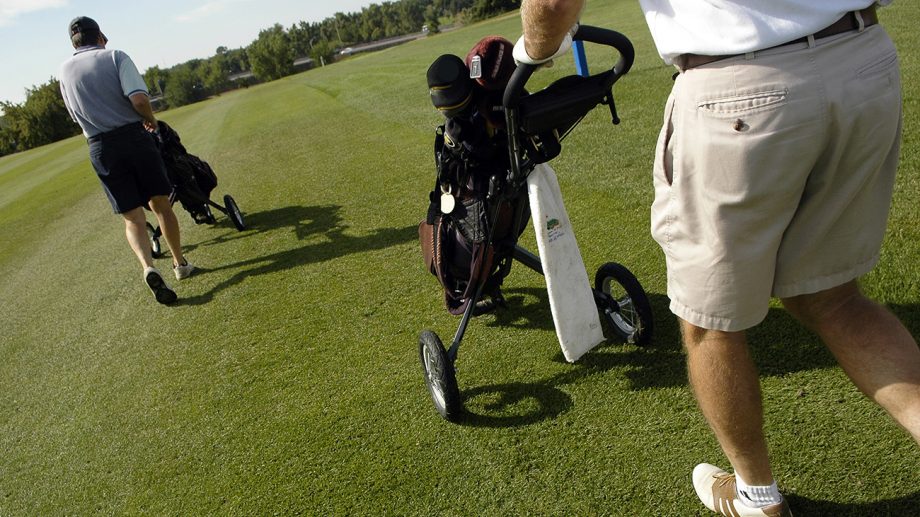 Seventy-five years ago this month, Bruce Williamson and E. Roy Jarman cobbled together the first Bag Boy pull cart from aluminum tubing, a few springs and a couple of lawnmower wheels. Three-quarters of a century later, not only is the company still around but it has spawned an ever-growing segment of the golf business now typified by high-tech and innovation.

Part of the reason for the surge in the popularity of what now are called “push carts” (“trolleys” on the other side of the Atlantic) is due to the COVID-19 pandemic. More people took up the game or returned to it and enjoyed the socially distanced physical exercise associated with a round of golf. Other factors included the cost of renting an electric or gas power cart or even the availability of carts at some courses.

Another reason just makes sense. The average stand bag with 14 clubs and a few balls weighs about 10 kilograms. No water bottle, no rain suit, etc.  Slugging that around during an eight-kilometre hike just doesn’t make sense.

The experts agree, starting with Golfdom Magazine’s opinion published just one year after Williamson and Jarman started making Bag Boys:  “… a player will timidly try one and may feel a little self-conscious … but then he finds himself fresher and feeling better. His shoulder does not ache and his scorecard shows better results.”

That opinion resonated with golfers in most of the world with the notable exception of the U.S. and, to a lesser extent, Canada. One global survey showed that use of either a power trolley (more on those later) or a push cart averaged almost 90 per cent in the United Kingdom compared with about 60 per cent in Canada and 22 per cent south of the border. (Some of that discrepancy can be attributed to course designs that make walking near impossible and heat and humidity in the southern U.S.)

Nevertheless, you can’t dispute the science. In 2016, writing on the website www.mytpi.com, Dr. Josh Nelson reported that a study by Dr. Neil Wolkodoff, medical director of the Colorado Center for Health and Sports Science, found that golfers who walked and carried their bag for nine holes burned just three more calories than those who used a push cart. The study also determined that golfers who carry their bag increase their risk of back, shoulder and ankle injuries.

“No matter how good your [golf bag] carrying system, you still have to use core muscles to hold the bag,” Wolkodoff told Golf Digest.  “When you’re pushing a cart, you don’t have the stress on your core musculature and shoulders.”

As it has since 1946, Bag Boy continues as an industry leader in innovation, with their Nitron cart which opens by simply hitting a button that activates a nitrogen-filled strut (like those on an SUV’s tailgate) and Top-Lok, a patented bag-to-cart attachment system that prevents twisting and turning while in use.

Clicgear is a relative newcomer to the game but arrived with a bang. Jim Annesley is president of Goliath Golf, Clicgear’s Canadian distributor. Like Heazel, Annesley has been in the golf business for decades and sees much wider acceptance of push carts than in the past.

“There are more women buying them and they are increasingly popular with younger golfers.” Part of the attraction may be the eWheels option that transforms the manual Clicgear push cart into an electric one.

“There are lots of new golfers buying them and that’s great news for the longevity of the game,” says Annesley.

As mentioned, the electric push cart is making inroads into the game and at a record pace, according to Joseph McLuckie, founder and president of JPSM Golf. His company is the Canadian distributor for industry leader Motocaddy as well as Stewart Golf, PowerBug and Cart-Tek. His product line covers everything from manual push carts to remote-controlled units and even models that, thanks to Bluetooth technology, follow you around the course at a respectful but convenient distance.

There are multiple reasons for the buying frenzy, not just for push carts but for all things golf, McLuckie surmises.

“I see many new golfers who want exercise, who because of COVID are working from home, have more free time and disposable income, and want to start off playing the game the right way, with the right equipment. And then there are the golfers who drifted away from the game but are coming back and want to enjoy the walk without slugging their clubs around the course.”

You don’t see many mothers toting a 10-kilogram toddler on their shoulders, do you? Nope. For centuries, moms have been pushing their hefty offspring in strollers.

Now just where do you think Williamson and Jarman got their initial concept? Moms are smart.