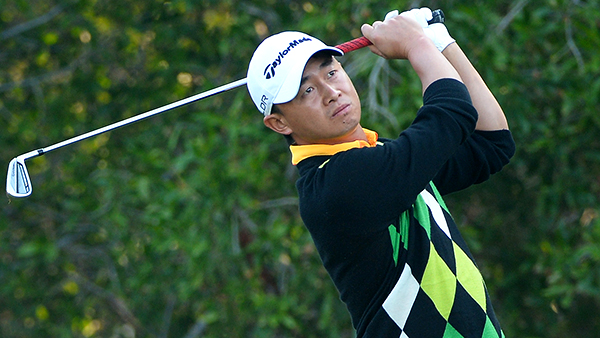 SHENZHEN, China – Huang Wenyi, a former laborer from China who didn’t start playing golf until he was 22, shot a 6-under 66 Thursday to take a one-stroke lead after the first round of the Shenzhen International.

The 34-year-old Huang had eight birdies to go along with two bogeys. He leads Felipe Aguilar, Kiradech Aphibarnrat, Byeong Hun An and Peter Uihlein by one at Genzon Golf Club.

Two-time Masters champion Bubba Watson (70) was four shots off the pace at 2 under.

Huang worked at a construction site in China’s Guangdong province to help support his family after his father was injured in an accident. He later got a job as a caddie at China’s first golf course, Chung Shan Hot Spring, and learned the game.

Huang is currently No. 1,189 in the world golf rankings after failing to make the cut in six European Tour events last year.

“This year is new year. Last year, play really bad,” Huang said. “But this year, maybe change the swing and yesterday, change the driver. But I hit driver very good. I like new driver.”

Watson was coming off a tie for 38th place at the Masters last weekend. He said it was difficult to get used to the speed of the greens in China and started his round with two bogeys before sinking three birdies in a row on holes No. 5-7.

“It’s about just feeling the greens out,” the American said. “(It’s) just one of those things that I’ve got to get used to. I think just more practice, more feel and I’ll get it better.”

Uihlein finished his round with four birdies on his last five holes.

“There’s no wind, so we thought the scores would be a lot lower,” said Uihlein, who won his only European Tour title at the Alfred Dunhill Links Championship in 2013. “You’ve still got to get it in the hole. Pins are pretty tricky. There are some pretty long holes, so it’s good.”