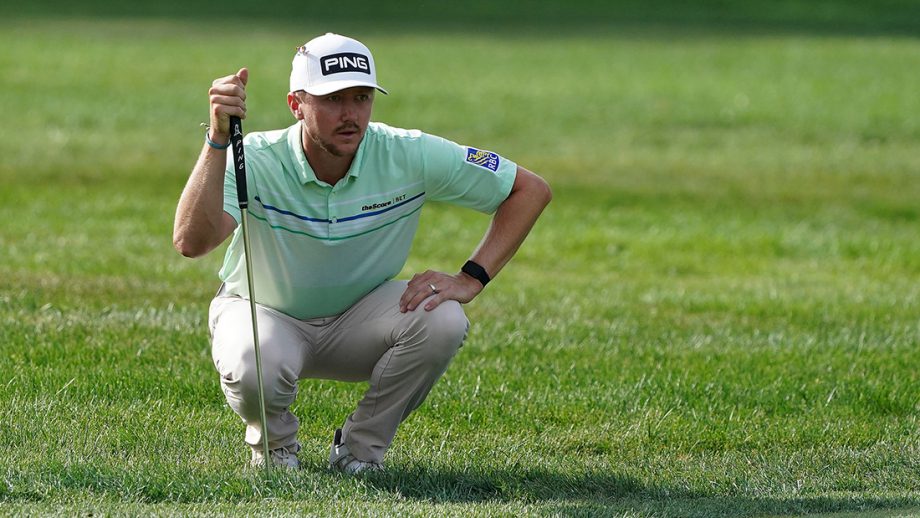 OLYMPIA FIELDS, Ill. – Dustin Johnson says his game feels similar to last week when he had the easiest of his 23 career victories.

It just doesn’t look that way at the BMW Championship.

Every par at Olympia Fields is hard work, and Johnson played the final 13 holes Saturday with nothing worse than that. It’s what carried him to a 1-under 69 and a share of the lead with Hideki Matsuyama, leaving them as the only players under par going into the final round.

“I feel like it’s fairly similar, just obviously these conditions and the greens are a lot more difficult,” he said. “This is pretty much a major championship venue, and the conditions, the way it’s set up, it’s playing just like a major.”

Matsuyama, who had a three-shot lead early when he holed a bunker shot for eagle at the start and stuffed a wedge in tight for birdie on No. 4, fell back with a string of bogeys and held it together for a 69.

“Great start and then just had to hang on,” Matsuyama said. “Just tried to do what I could to stay in, and I was happy with how it went.”

Johnson and Maruyama were at 1-under 209. Everyone else was over par going into the final round.

Sunday is one last chance for some players to be among the top 30 who advance to the FedEx Cup finale, and one last round for others – like Tiger Woods – to prepare for the U.S. Open on a course that plays every bit as tough.

Patrick Cantlay only hit five fairways and didn’t make a birdie as he tumbled out of a tie for the lead with a round with a 75 that left him five shots behind and might cost him a spot in the Tour Championship.

Rory McIlroy had to play left-handed to escape the base of a tree in starting the back nine with a bogey, and he finished with a shot he thought was going to be long, came up 70 feet short and led to a three-putt bogey for a 73. He still was only three shots back assuming he plays.

McIlroy said after the round his wife is expecting their first child, news they had shared with family and friends but was revealed during the NBC broadcast. He said his caddie and best friend, Harry Diamond, has kept a phone in his pocket to not miss a call. And if it’s time, he said, “I’m out of here.”

Jon Rahm matched the low round of the day at 66 that could have easily been one shot better if not for a blunder that even he couldn’t believe. He forgot to set a marker down on the green before picking up his golf ball on No. 5, freezing in his tracks when he realized what happened.

“I was thinking of somebody else or something else … and yeah, I just picked up the ball without marking it, simple as that,” Rahm said after a round that left him only three behind. “I can’t really give you an explanation. It’s one of those things that happen in golf. Never thought it would in my professional career, but here we are.”

A week ago at The Northern Trust on a rain-softened course with little wind, Johnson was at 22-under par through three rounds and had a five-shot lead. That felt easy. This does not.

Joaquin Niemann had a 68 and was part of the group at 1-over 211 that included Adam Scott (70) and Canada’s Mackenzie Hughes (69). Another shot back were the likes of Rahm, Bubba Watson, Brendon Todd and Kevin Kisner, who had 15 pars, two birdie and bogey for his round of 70.

Canadian @MacHughesGolf is the first golfer to register two rounds under par this week 👀 pic.twitter.com/8rzR80hi5O

Hughes is in search of his third top-10 in the Return of Golf (Travelers Championship/T3, the Memorial Tournament presented by Nationwide/T6); owns one victory (2016 The RSM Classic) in 108 TOUR starts. He is projected to advance by finishing inside the top 30.

“You know, this golf course is actually a pretty good distraction because it’s so hard that you have to just focus on every shot so much that it’s easy to just kind of get in your own world out there and just the task at hand, the task at hand. So that’s been kind of nice,” said Hughes.

“Obviously in between shots your mind wanders sometimes, but this is kind of where you want to be. Obviously I would have loved to have locked it up by now, but I’m happy to have this opportunity and I’ll go embrace it tomorrow.”

Rounds like that go a long way at Olympia Fields, the former U.S. Open course playing like one with its thick rough and rock-hard greens and enough wind to make the fairways look tighter than they are.

“I’ve played good and bad this week, and I’ve had basically the same score every day,” Scott said, whose superb bunker play kept him close. “I saw today, though, that if I hit it well, there’s a chance to make a few putts. One of this leading group will shoot 4 under tomorrow, 4 or 5 under I’m sure.”

Woods, meanwhile, had a reasonable start to his round and wasn’t losing much ground until he lost a tee shot into the water right of the 17th fairway and then smothered a fairway metal to the left. He walked across a cart path smacking the club off the concrete and twice looked like he wanted to break it. He missed a short putt for triple bogey and shot 72.

Woods has yet to break par this week. One more round like that and it will be the first time in 10 years – the Bridgestone Invitational at Firestone – that he had all four rounds over par. He needed something around fourth to advance to the Tour Championship for the first time since 2018.

Matsuyama is trying to end three years without a victory. Johnson is trying to win for the second time in seven days, along with positioning himself to be the top seed at the Tour Championship, which would allow him to start the tournament with a two-shot lead under the staggered start.

For players like Niemann, Hughes of Dundas, Ont., and Scott, they are simply trying to get to East Lake in Atlanta. All of them are one round away on a golf course where small mistakes can lead to bogeys or worse on just about every hole.

Conners recorded an ace on the par-3 6th hole on Saturday.