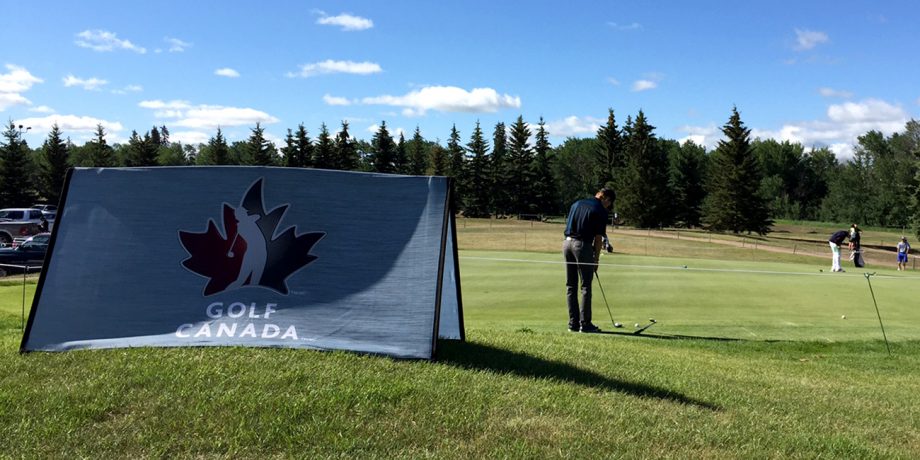 GIBBONS, Alta. – The second round of the 2015 CN Future Links Western Championship at Goose Hummock Golf Course in Gibbons, Alta., concluded with Kenna Hughes and Andrew Harrison atop the leaderboards.

Kenna Hughes, who finished the 2014 edition of this event in third place, capitalized on a 7-over 78 – tied for her division’s low round of the day – to capture a one stroke lead heading into the final round. The 17-year-old Calgary native finished with a 2-over-par back nine and has a two-day total of 15-over 157.

The leader going into the round, 16-year-old Kehler Koss, slipped to second place following a round of 81. The Calgarian is 16-over-par in the competition and currently holds the low round in the Junior Girls division after opening with a 77.

Four shots off the lead is Bria Jansen of Cochrane, Alta. The 18-year-old finished the day with a birdie and six straight pars to shoot a 7-over-par 78 and is 19-over for the tournament.

Andrew Harrison maintained his grasp of first place thanks to a birdie on the final hole – his fourth of the day – to finish with a 74. The Camrose, Alta., product sits 3-over 145 heading into the final round. Mirroring the final standings of the 2015 Alberta Junior Boys Championship, Harrison is currently ahead of Jason Martens. A native of Edmonton, Martens shot 1-under on the front nine to finish 2-over-par 73; he is one shot back of the lead.

Not far behind is Calgary’s Brendan MacDougall who sits two strokes off the lead after a round of 74. A quartet of juniors sits T4, four shots back of the lead.

Earning their places into the 2015 Canadian Junior Boys Championship will be the top six finishers from this competition. Summerlea Golf and Country Club in Vaudreuil-Dorion, Que., will host the national championship from August 2-6.

The top six Junior Girls will receive exemptions into this year’s Canadian Junior Girls Championship. The competition will be contested from August 3-7 at Deer Park Golf Course in Yorkton, Sask. In addition, the CN Future Links Junior Girls Western champion will receive entry into a 2016 Canadian Women’s Tour event of her choosing.

The final round of the CN Future Links Western Championship will commence tomorrow morning at 7:30 a.m. MDT.

For full second round results from the 2015 CN Future Links Western Championship and final round tee times, please visit the tournament website here.