Hugo Bernard: A Bright Future Ahead 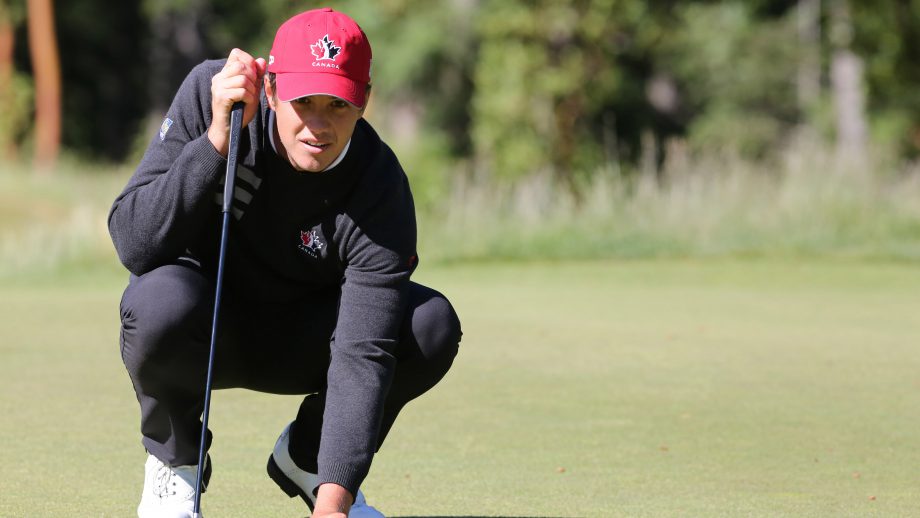 Ever since he traded in his hockey stick for a set of golf clubs, Hugo Bernard of Mont-Saint-Hilaire, Que. hasn’t looked back.

With an pending transition to the professional ranks later this autumn, the national team member recently took a moment to reflect on his journey.

“I played hockey for two years but wasn’t really good at it, so I decided to give golf a try,” he recalled with a smile about his humble beginnings.

“My dad introduced me to the sport of golf when I was nine years old.  We played at this small par three course down in my hometown,” noted Bernard, who is the youngest of three kids.

“I just remembered it was a lot of fun; and I basically taught myself from the age of nine to 16.”

The now 23-year-old says he scored breakthrough results at the age of 17 that opened his eyes to his true potential.

“When I was 17, I won the Quebec Junior Boy’s title. Then, after I came fifth at the Canadian Junior Boys Championship.  After that, I was invited to join the national development team,” he pointed out.

“So from there, I was thinking if I can continue to improve my game I could be pretty good at it,” added the 2016 Canadian Men’s Amateur Champ.

Today, as Canada’s top ranked amateur on the men’s side, Bernard credits his time on the national team program for taking his game to the next level.

“From the coach, Derek (Ingram) to the physio, and the mental coach, the program gives us everything we need to be successful. There’s also a nutritionist and strength and conditioning coach; and so it’s been great to have all these amazing resources and have that support,” pointed out the 23-year-old amateur standout.

“Also, through the program we have the opportunity to travel and compete around the world which has been a great experience and that’s done a lot to help me improve my game.”

National team head coach Derek Ingram is quick to speak about Bernard’s development during his time with the team.

“About three years ago Hugo was ranked in the 2000s and over the last three years he’s moved up into the top 30s; and is today he’s one of the best amateurs in the world,” noted Ingram.

“He’s made small refinements in every area of his game over the years that has allowed him to flourish,” he added.

“Hugo’s still got the U.S. Amateur and most likely the World Amateur; and then after that he’s going to turn pro and try to get his Web.com card……I think he’s got a bright future ahead and he’s got a chance to be a very successful PGA TOUR player one day.”

Bernard recently finished T41 at the 2018 Canadian Men’s Amateur Championship at Duncan Meadows Golf Course & Pheasant Glen Golf Resort. He’s one of 10 Canadians in the field this week at the U.S. Men’s Amateur at Pebble Beach.

Having recently completed an online degree at the University of Montreal with a major in business, Bernard says he is both inspired and encouraged by the success of recent graduates of the national team program.

“I look up to someone like Mackenize Hughes who went from the development program to the national amateur team program to the young pro program; and now he’s a winner on the PGA TOUR…….It just proves that if you follow the plan then you are going to have success,” said Bernard.

“Mackenzie is a super nice guy and always gives me a lot of good tips when I talk to him.   And as well, I’ve played play golf with Corey Conners down in Florida and he’s a great player and learned so much from him each time we play together.”

Both Conners and Hughes are pleased to know that their success as professionals have inspired the next wave of Canadian amateurs.

“It’s nice to be able to support one another,” Conners noted.

“I personally give a lot of credit to Golf Canada and their development programs and helping us get to this level; and there’s a lot of guys following kind of behind Mackenzie and I who will hopefully add more Canadians to the PGA TOUR in the coming years.”

Hughes echoes his the sentiments of his long-time teammate.

“I was lucky enough – and Corey as as well – to be part of those teams; and to think the resources that we have on those teams are second to none in terms of the quality and what you’re getting out of it,” said Hughes who won the RSM Classic in 2016.

“I don’t think that Corey or I would be here as fast as we got here without their help,” he added.

“So we owe a lot to that for all the Canadians coming through right now and the surge of Canadian talent.”

Besides the tips and encouragement from the recent graduates of the program, Bernard says he’s also received words of wisdom from 2003 Masters champion Mike Weir.

“I’ve talked with Mike Weir also – I mean, he won the masters – so I just pay close attention to what he tells me,” said Bernard.

“Mike went to Q-school eight times before he got his card  – he wasn’t the best junior and he wasn’t the best amateur – but through working hard, he got there and did something no other Canadian has done.  So seeing what he’s accomplished is very inspiring,” said Bernard.

When asked about his own game, the 6 foot 3 left hander believes he’s got the skill set to achieve a smooth transition into the pros.

“I’m a long hitter, I hit it pretty far.  My approach game is solid and my wedge game has been improving a lot since last year.  I can roll my putt pretty good…..So, I like my chances when everything comes together,” he said.

As he looks forward, the former hockey player turned golfer is clear about his future goals.

“In five years, I see myself on the PGA TOUR for sure.  My goal this year is to do Q-school and try to get my Web.com Tour card. Ideally, play one or two years on the Web.com Tour and then get onto the PGA TOUR,” he said.

Having received a lot of sound advice from the likes of Hughes, Conners and Weir, Canada’s top ranked amateur was asked what his advice would be for the young junior golfers aspiring to get to his level.

“Just learn from each experience and have a positive attitude and see where it takes you because that’s basically what I did,” he replied.

“As well, you have to have a plan and put in the work; and if you do that then you are going to have success.”