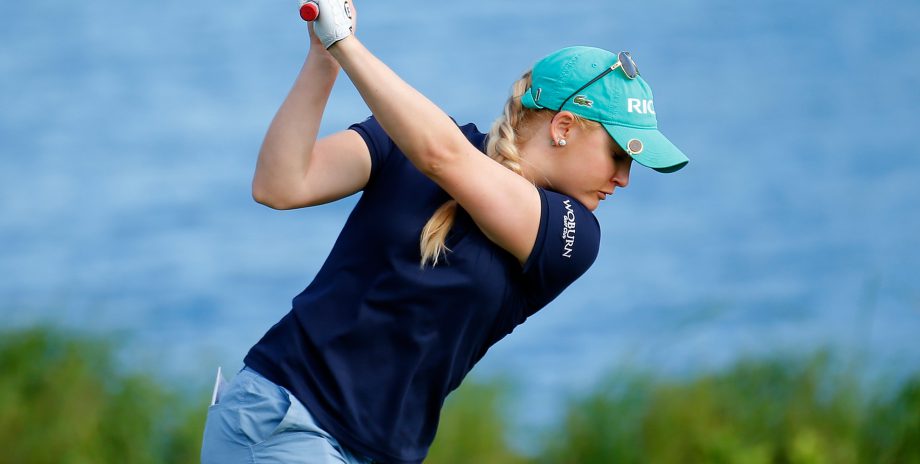 PARADISE ISLAND, Bahamas – Charley Hull, Megan Khang and Haru Nomura all sit atop the leaderboard at 8-under par after two rounds of the Pure Silk-Bahamas LPGA Classic. Players battled gusty conditions at the LPGA’s season opener with winds reaching gusts of 30 mph. The young trio is one shot in front of a group of four players including defending champion Sei Young Kim, Anna Nordqivst, Catriona Matthew and Min Seo Kwak.

The average age of the leaders is just 20 years old (Hull at 19, Khang at 18 and Nomura at 23) and it marks the first time in each of their careers to hold the lead at an LPGA event after 36 holes. This event has been kind to first time winners and crowned Rolex First-Time Winners twice in the first three editions (Ilhee Lee in 2013 and Sei Young Kim in 2015).

Hull followed her opening round of 68 with a 3-under 70 in the morning wave to get to 8-under par. The teen from England had a sunny disposition when it came to the challenging wind conditions.

“I’ve never played the wind, or the golf course with that wind before,” said Hull. “It was a completely opposite direction. So it was good fun to play in that direction, I like it in that direction actually. No, it was good, just got to keep patient out there. Obviously the same for everyone. No, I enjoyed it, I thought it was fun.”

Khang, who is making her rookie debut this week, said she didn’t have many expectations in the season opener but feels like she belongs out on Tour. Seeing her name at the top of the leaderboard might take some getting used to.

“It definitely will take some time to sink in but I think my game’s at a good place right now and I definitely think I can hold my own,” said Khang. “I’ve played in the Open a few times and they’re all there, all the pros are there, even like the best amateurs make it there. So I think I can hold my own and it’s going to take a while for it to sink in after two days.”

Cristie Kerr tied the tournament record in impressive fashion in such high winds with the low round of the week, 8-under 65. She shot a 77 on Thursday and jumped from T95 to T13 and agreed the round of 65 was a solid day.

“Yeah, I would say,” said Kerr. “Yeah, after yesterday, it wasn’t looking good and very difficult day and I just came out and just did it.”

Top-ranked American Stacy Lewis followed up her opening round of 73 with a 5-under 68 on Friday to move into a tie for 10th and sits just three shots back.

Canadians Maude-Aimee LeBlanc and Brooke Henderson both have a share of 20th at 3-under, five-shots off the lead.