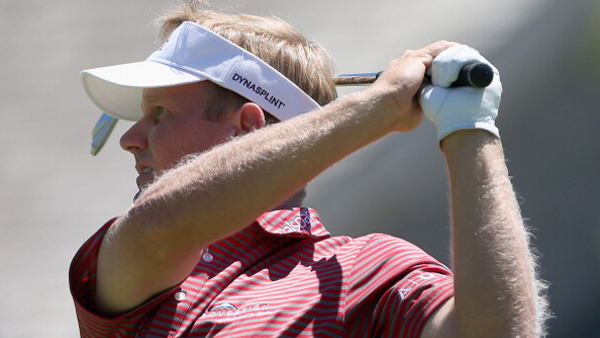 WHITE SULPHUR SPRINGS, W.Va. -Billy Hurley III doesn’t plan to lose much rest sitting on a third-round lead for the first time on the PGA Tour.

The former U.S. Navy officer shot a 3-under 67 on Saturday to extend his advantage to two strokes over Angel Cabrera entering the final round of the Greenbrier Classic.

“I’ve been working for a long time to win on the PGA Tour,” Hurley said. “I figure if I shoot the lowest score tomorrow, I can’t lose.”

Hurley never relinquished the lead he has held since midway through the second round at Old White TPC. He birdied the par-5 12th and par-4 13th before dropping a stroke on the par-3 15th.

He had a 12-under 198 total. No third-round leader has won the Greenbrier Classic, now in its fifth year. Playoffs have decided the tournament twice.

Cabrera shot 64. He’s looking for his first non-major win on the PGA Tour.

Kevin Chappell was third at 9 under after a 69. Steve Stricker had a 68 to top the group at 8 under.

There will be more than a trophy to raise and a $1.2 million winner’s check available Sunday. The four best finishers not previously eligible for the British Open among the top 12 on the final leaderboard will earn spots in the July 17-20 tournament at Royal Liverpool.

Hurley finished his five-year Navy service in 2009 and would still be a naval officer if golf wasn’t keeping him busy. He returned to the PGA Tour this year after playing on the Web.com Tour in 2013.

He said nerves won’t play a part in how he gets ready for what could be a memorable Sunday.

“I’m going to keep doing what I’m doing,” he said. “I just want to put my mind in position so that I can play well. I slept fine last night. The benefit of the Navy if you learn how to sleep anywhere. I think I’ll sleep fine tonight, too.”

Cabrera wore an Argentine blue shirt in the third round and is riding his country’s momentum in the World Cup, including Saturday’s 1-0 win over Belgium to advance to the semifinal round.

“I was very happy when I found out they won,” Cabrera said, adding that he was equally as giddy when he started his round with four birdies on the first six holes.

Old White sets up nicely for Cabrera’s long drives and he made four birdie putts of 19 feet or longer.

“I was able to get the speed of the greens, and that was the big difference,” Cabrera said.

At the Wells Fargo Championship in May, Cabrera was the second-round leader but closed with a pair of 75s.

Another under-par round Sunday would mark the first time that he has had four rounds in the 60s since the 2010 Deutsche Bank Championship.

Chappell barely got anything going until making a 12-foot putt for birdie on the par-5 17th.

“I don’t think I’ve had my best ball-striking day yet,” he said. “Hopefully, my putter gets hot and (it) should be fun.”

Stricker, in his eighth tour event this year, will compete next week at John Deere and is leaning against going to the British Open unless he has one or more high finishes before then.

The highlight of Stricker’s third round was a bending 42-foot putt for birdie on the first hole. He was 1 over on his round at the turn before making three birdies the rest of the day.

“Anything can happen and that’s the truth,” Stricker said. “There are not a lot of guys in between me and the lead … but there are a ton of guys right behind us. So anybody can come out of the pack here.”

David Hearn has played three very consistent rounds of 68 to put him at 6 under, while Stephen Ames sits 2 under after shooting 71 in round 3.