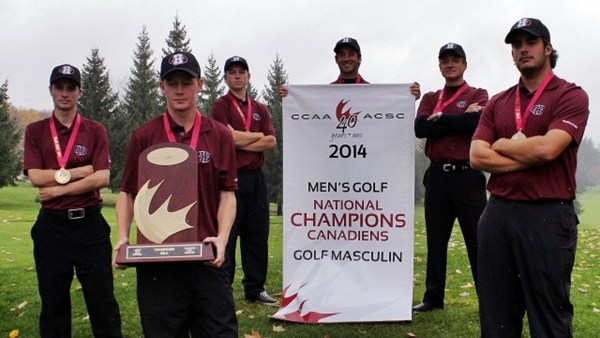 The final round of the 2014 PING CCAA Golf National Championships were washed out Friday. Heavy rain was forecasted throughout the week in Quebec City and the surrounding area and Mother Nature finally forced the cancellation of Round 3. The event was shortened from 54 holes to 36.

As a result, the Holland Hurricanes captured their first-ever CCAA National Championship title in the men’s division. All-Canadian Eric Locke led the Hurricanes to a tournament-best overall score of 286. Holland placed three shots ahead of the Camosun Chargers to earn gold.

The defending champion University of the Fraser Valley Cascades were forced to settle for bronze, six strokes back of the Hurricanes. The host Lions finished one-shot back of a medal.

The host St. Lawrence Lions saw their streak of six straight individual women’s champions come to an end, but the women’s team celebrated the team title on Friday after a commanding 9-shot victory.

In men’s individual play, Jarred Callbeck of Camosun College fired rounds of 68-70 for a one-shot victory. Callbeck had a 36-hole total of 138 to sit at 6-under.

Hugo Bernard (139) of Cégep André-Laurendeau fired a 68 in difficult conditions on Thursday which earned him a silver medal. Adam Poulin (140) of Champlain St. Lawrence finished third at 4-under. An impressive total of 10 golfers were under par after two rounds.

The St. Lawrence Lions had previously won gold in women’s individual play in each of the last six seasons.

Women’s All Stars were Weavers, Ouellette, Jacques and Lee.

The 2015 National Championships will be hosted by the University of the Fraser Valley.