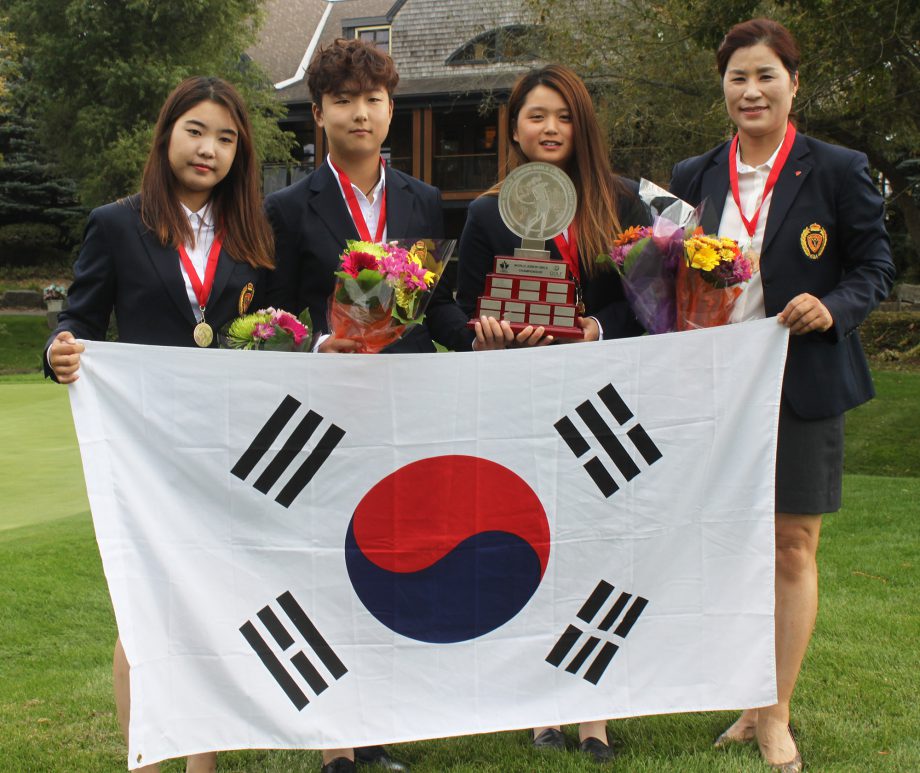 As the temperatures cooled and fall was ushered in, Golf Canada’s championship season drew to a close with the conclusion of the World Junior Girls Championship. Team Korea completed a wire-to-wire victory and claimed both the team and individual titles at the second playing of the competition for the world’s best 18-and-under female golfers.

Hye-Jin Choi of Paju-si saved her best performance for last, posting 7 birdies in a bogey-free round to finish 7-under 65 for the lowest round of the tournament.

“Through the first three rounds I was focused on improving my putting, but today I sank a birdie on the first hole and with it, gained a boost of confidence for the round,” said the individual champion. “I felt better out there today than during any other round. I knew I could do it and at the same time, I trusted that my teammates would get it done, as well.”

The 16-year-old credited her competitors for challenging her across the course. “On the 14th hole I made a birdie and followed it up with a difficult par on the 15th.  At that point, I had a good feeling that I was going to be the individual winner. Up until then, I was still worried because my playing partners from Sweden and Denmark are great players and they could have made a charge and caught up.”

“Team competition is not very common in golf,” added Choi, whose squad was making its debut in the championship. “So when I get a chance to play as a team and represent my country, my focus is always on the team. When I saw their scores, I was so relieved and was then able to turn my attention to winning the individual title. I am so happy and proud of us.”

The remaining two members of the Korean contingent completed the competition tied for fourth at 1-under 287. Eun-Soo Jang of Chang Hyung shot a final-round of even-par 72 to count towards her team’s winning total of 22-under 554. The final member of the squad, Shin Hye Kim of Icheon, carded a 73.

“This is a really big win for us,” said head coach Sang-Won Ko, whose trio was the only team to all finish with under-par rounds. “Coming into the tournament, we never expected that we would win. Our top priority was to learn since the environment and course would be so different to us. I am so happy with the result. It is an added bonus to win because we learned so much during the week. I am really proud of all of my players.”

“Hye-Jin was crazy today!” said Ko, when asked about the World Junior Girls champion. “I have mentioned during the week that she struggled with her putting, but today it was simply amazing.”

Finishing second in the individual competition was Cecilie Bofill of Denmark. The native of Silkeborg began the day tied for third, but tallied five birdies en route to a 3-under 69. The 17-year-old moved to 5-under 286 in the competition to trade places in the standings with Filippa Moork of Sweden. The native of Karlstad was 2-over on the day and finished 2-under overall to claim sole possession of third.

Bofill’s performance coupled with Frederickshavn native Puk Lyng Thomsen’s 1-over 73 propelled Denmark into the runner-up position in the team competition at 4-under 572. Four strokes shy of second was Team Sweden which counted identical rounds of 2-over 74 from Moork and Frida Kinhult of Fiskebackskil to finish even-par 576.

Kathrine Chan led the Canadians in the field with a 3-over 75 performance. The native of Richmond, B.C., finished the championship at 15-over 303.

Tournament Director Mary Beth McKenna echoed the sentiments of all those involved when asked to reflect on the competition. “In speaking with the players and coaches this past week, I think this event was a tremendous success. From the coaching summit and the skills clinic to an entertaining and exciting tournament – I truly believe this was a very positive experience for not only the golfing community in Ottawa, but also the development of junior girls’ golf on the international stage.”

Additional information on the 2015 World Junior Girls Championship can be found on the tournament’s official website at www.worldjuniorgirls.com.