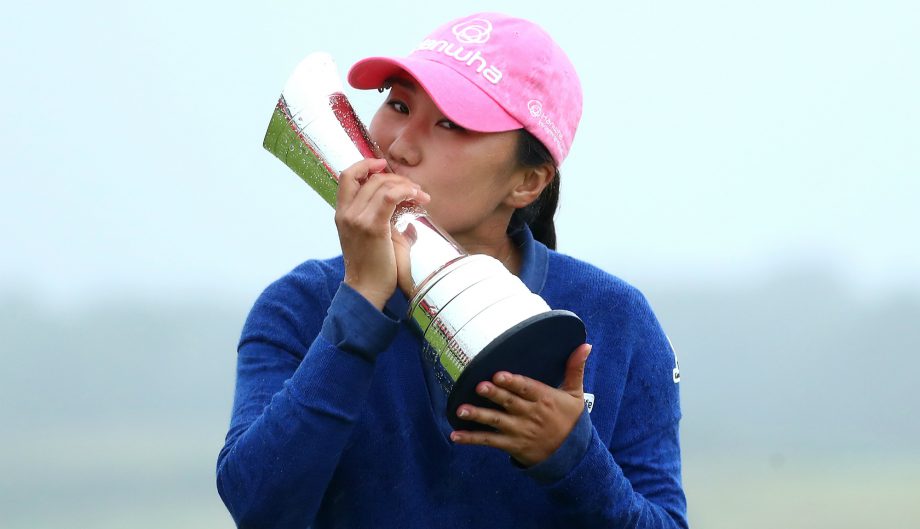 I.K. Kim banished the haunting memory of missing a 14-inch putt to win a major and replaced it with the sweetest sensation.

Finally, she can call herself a major champion.

Staked to a six-shot lead in the Women’s British Open, Kim never led anyone get closer than two shots at Kingsbarns Links and sealed victory with a bold hybrid over the burn to the 17th green. She made nine pars on the back nine and closed with a 1-under 71 for a two-shot victory.

“I cannot describe my feelings,” Kim said. “I just tried to have some fun, but it wasn’t fun on the back nine.”

Jodi Ewart Shadoff made her work for it by charging home with a 64 to put pressure on the 29-year-old South Korean. Kim didn’t falter over an increasingly soggy course, however. She finished at 18-under 270 to capture the $487,500 prize.

Michelle Wie went out in 30 to give Kim something to think about, but the 27-year-old from Hawaii stalled and closed with a 66 to tie for third with Caroline Masson (67) and Georgia Hall (70).

Brooke Henderson of Smiths Falls, Ont., tied for 31st at 3 under.

Kim now has won three times, the most by anyone on the LPGA Tour this year, all in the last two months.

But this was the biggest by far.

She was no more than 14 inches away from winning the 2012 Kraft Nabisco Championship for her first major when she clasped her hand over her mouth in disbelief when it spun out of the hole. She lost in a playoff, and it was a tough memory to shake.

“I almost cried when I won. Winning is great,” Kim said. “It’s a long process to get over 2012. A lot of people helped me. Now I enjoy playing golf again. What it did teach me is to to give the same effort to every shot, even the shortest of putts.”

Armed with a six-shot overnight advantage, Kim was rarely threatened throughout a four-and-a-half hour round in which she crucially made only one bogey.

Ewart Shadoff matched the course record _ reached earlier this week by Wie and Olympic gold medallist Inbee Park _ and got within two shots of Kim with her eighth birdie of the round that put her at 16 under.

“I didn’t think starting the day that I would have a shot,” she said. “I had a great stretch in the middle of the round to get me going. My plan at the start was just to take the opportunities when I got them and that’s what I did.”

Wie was the only other player to get closer than five shots of Kim.

Seemingly impervious to the pressure of leading, Kim sailed along in the damp, overcast conditions, her steady play offering little encouragement to a chasing pack that also included the likes of Lexi Thompson, Stacy Lewis, Park and Moriya Jutanugarn.

A birdie at the par-3 opening hole, where her tee-shot nearly found the bottom of the cup, set Kim on her way. She made birdie on the par-5 eighth, and then had her first bogey in 44 holes with a three-putt at the turn.

Kim’s clinching shot, however, came as late as the penultimate hole, when a beautifully struck hybrid from the fairway sailed over the burn fronting the green and finished 15 feet from the flag. A routine par at the last completed her five-year journey between missing and making.