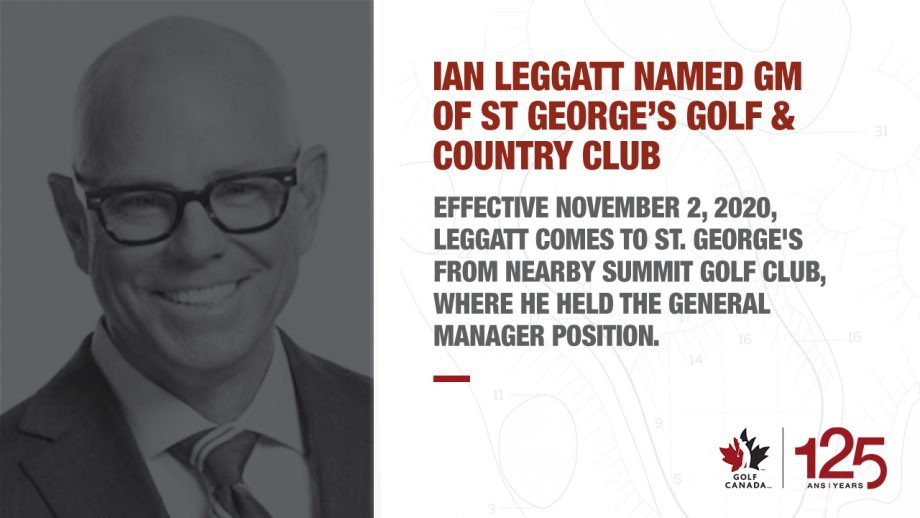 Ian brings a unique background to the position as a former PGA Touring Professional, and winner of the 2002 Tucson Open. He has spent the last eight years leading a successful operation at Summit Golf Club. He is a proven leader with an established reputation and track record of translating his vision and passion for golf into meaningful cultural changes.

“We are very excited to welcome Ian to St. George’s,” said John Ciardullo, Chair of the Board. “The Board of Directors and Search Committee was unanimous in selecting Ian among highly qualified candidates from Canada, the United States, and Europe. Ian’s golf-centric background and his real vision for delivering an exceptional Member experience are precisely the skills and talents that will position St. George’s for long-term success in Canada and will elevate the Club’s international reputation.”

“It is an honour to be the General Manager of St. George’s Golf and Country Club. The Club’s iconic standing in Canadian golf, along with its global presence, truly excites me,“ says Leggatt. “It is the cultural presence of the game that differentiates great clubs from good ones. I look forward to enhancing the culture of golf at St. George’s and delivering a world-class golf experience.”

Leggatt’s November start date proves timely with St. George’s poised to host the 111th RBC Canadian Open in 2021 after the event was postponed in 2020 due to the ongoing global pandemic.

St. George’s Golf and Country Club was designed by Stanley Thompson in 1929 and is currently ranked #23 in the world by Golf Digest and is the highest Canadian rated 5-Star Platinum Club. The classically designed course has played host to the Senior PGA Tour, LPGA Peter Jackson/Du Maurier Classic on five occasions, and the Canadian Open in 1933, 1949, 1960, 1968, and 2010.