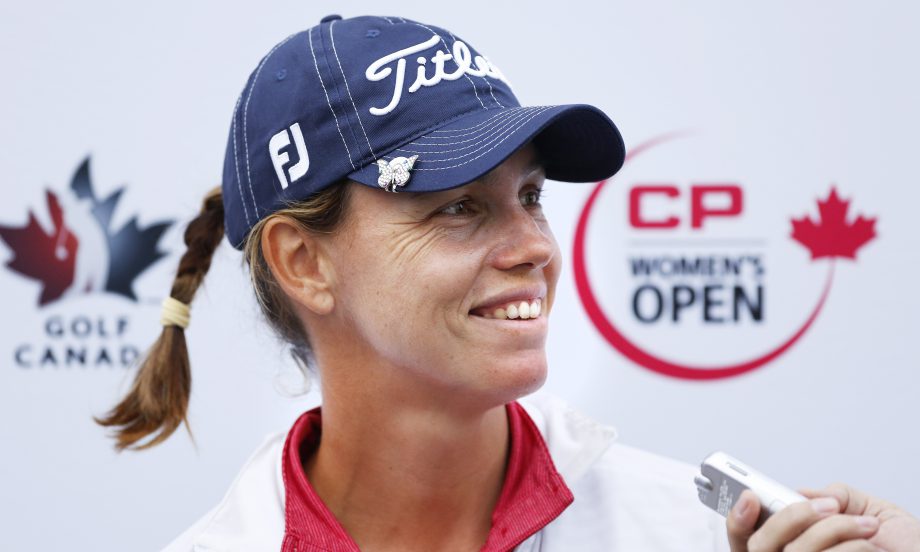 Coquitlam, B.C. (Golf Canada) – Karine Icher shot a bogey-free 65 on Thursday to take a two-shot lead after the first round of the Canadian Pacific Women’s Open at The Vancouver Golf Club.

“My putting was very good, and I think today I’ve seen the hole bigger than the other days,” Icher said. “So sometimes you have days like that where everything works, so I’m quite happy with this one.”

Icher’s round was keyed by a stretch of six birdies in seven holes from holes 5-11 to move her from 1-under to 7-under.

“When you make some birdies like that in a row, you have more and more confidence and build some confidence through the round,” Icher explained. “Then it’s good for the tournament, for the season, for everything. I mean, it’s always nice to have some rounds like that where you don’t have so much questions. You know the club, you take the club, you hit the shot, and it’s close to the pin.”

Chasing Icher down will be two-time former champion Lydia Ko, who sits two back after an opening round 67, and a group of four players – Danah Bordner, I.K. Kim, Stacy Lewis and Pernilla Lindberg – who are all at 4-under-par.

Ko birdied the final two holes of her opening round to shoot a 5-under 67 to sit two behind the lead at the Canadian Pacific Women’s Open.

“Yeah, hopefully that will give me good momentum tomorrow,” Ko said of her strong finish. “But playing in the morning and then afternoon tomorrow there is quite a bit of wait, but I’ve just got to keep the positive attitude going. Hit one shot at a time and just have fun out there.”

Three years ago, Ko burst onto the scene at The Vancouver Golf Club becoming the youngest winner in LPGA history at a mere 15 years, 4 months and 2 days in just her third LPGA event.

“I think the biggest difference is me. I don’t have the glasses, and I feel much older,” Ko said with a smile. “But it’s great to come back to a course where you’ve played well and the spectators have been great and they’ve been supporting me today, even in the practice rounds. It’s definitely a great where you feel really welcome.”

Ko has always felt welcome in Canada and admitted that her and her family nearly moved to area when she was younger.

“I just always feel very welcomed when I come to Canada,” Ko said with a smile. “I feel Canada is quite like New Zealand, so I love coming back here. When I was younger we nearly moved here.”

Brooke Henderson of Smiths Falls, Ont., has been the early talk of the tournament on the heels of her historic victory this past weekend which earned her full membership on the LPGA Tour. Her steady play continued during Thursday’s opening round, firing a 2-under 70 to sit as the low Canadian with a share of 13th position. The 17-year-old admitted it was a special moment to stand on the first tee Thursday as a newly minted member of the LPGA Tour and fan favourite at The Vancouver Golf Club.

“It was cool. It was the first time as an LPGA member, right after the win last week, I really wanted to get another good number today, and 2-under, I’ll take it,” said Henderson. “The course wasn’t easy out there today, though Karine Icher is making it look that way. But I’m excited to get back out at it tomorrow. The crowds were unbelievable, and just to be back home in Canada and playing in front of them was really cool.”

Second-round action gets underway Friday at 7:04 am PT. Tickets are available at the gate and kid’s 17 and under are free.