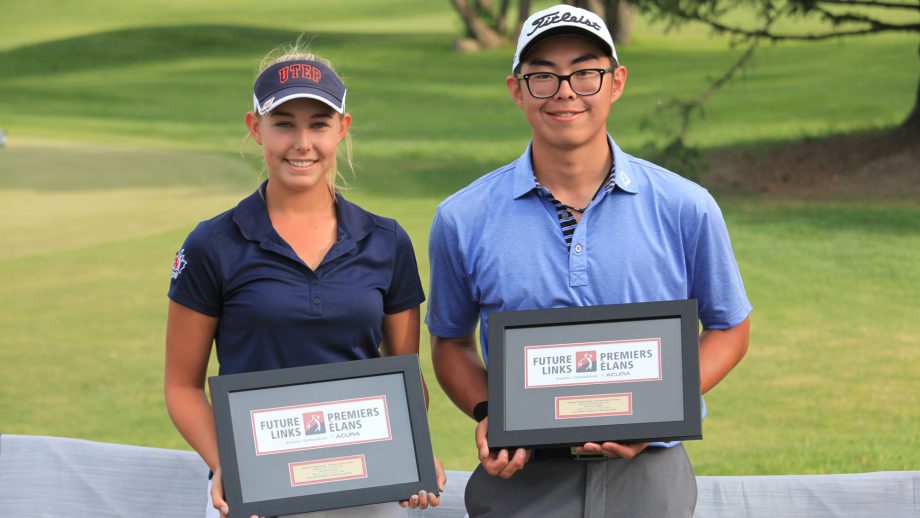 HIGH RIVER, Alta. – The sun was shining down on the 2018 Future Links, driven by Acura Western Championship as Kai Iguchi went wire-to-wire while Taylor Stone came from behind to win on Sunday at Highwood Golf.

Kai Iguchi continued his impressive tournament run after dominating the field during the final round. The Banff, Alta. product fired six birdies and an eagle to lock up the junior boys division with a convincing 10-stroke victory at 11-under-par 199.

“I made a lot more putts than I have during the past couple of days. I just limited the mistakes and kept it steady,” said the 18-year-old who tied Highwood Golf’s competitive course record. “This is my first big win. It’s still relatively early but this is really good for momentum and confidence for the season.”

Ethan Choi, of Pincher Creek, Alta., held on to his second-round position to end the tournament in second at 1-under-par 209. Brycen Ko and Ethan de Graaf finish with a third-place total 2-over-par 212.

The other top-six finishers earning exemptions into the 2018 Canadian Junior Boys Championship on July 30-Aug. 2 at Medicine Hat Golf & Country Club in Medicine Hat, Alta. are Benjamin Farrington of Fort McMurray, Alta., and Korbin Allan of Strathmore, Alta., who won a playoff for sixth spot with a par on the 2nd playoff hole.

In the junior girls division, Taylor Stone moved up the leaderboard to emerge victorious. The eighteen-year-old stayed within striking distance throughout the weekend, entering the final round two shots behind the lead.

Stone, currently a freshman on the University of Texas El Paso’s golf team, was the only player in the junior girls division to record a score  in the red during round three. Her tournament-best 69(-1) helped earn her medallist honours with a 5-over-par total of 215.

“My game plan over the past few weeks was just to have fun and enjoy the whole experience because it’s my last junior year,” said the Calgary, Alta. talent, who will add this victory to her win at last weekend’s PGA of Alberta Junior Masters. “It means a lot. My goal was to win so I’m really happy that I’ve stuck with my plan.”

Fellow Calgarian Tillie Claggett, who started the tournament in seventh, carded a round of 3 over to climb up the leaderboard for the second consecutive day. The fourteen-year-old finished in solo-second at 12-over-par 222, while round one leader Emily Zhu ended up in third at 13-over-par 223.