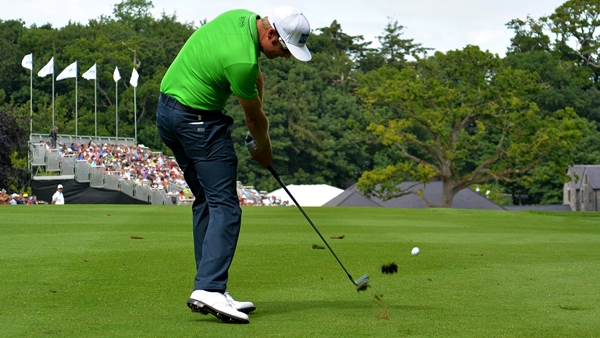 CORK, Ireland – Mikko Ilonen of Finland birdied the last hole to stay on top of the Irish Open leaderboard after the third round on Saturday.

Ilonen, who has led from the outset, carded a 2-under-par 69 to move to a 12-under total at Fota Island.

The leader by two shots overnight, Ilonen will take a one-shot lead into the final round over Danny Willett of England, who eclipsed Ilonen’s own course record by a shot with an 8-under 63 that also included a hole-in-one at the seventh.

One shot further back on 10 under was crowd favorite Graeme McDowell, who birdied two of his closing three holes in a score of 69. The Northern Irishman was not only targeting a first victory this year but also a maiden Irish Open victory.

“It’s been fun to come here this week after the pressures of last week’s U.S. Open and just let off some steam and relax, and enjoy my golf again, and also enjoy the odd pint of Guinness in the evenings,” McDowell said.

“I will now try and give the crowds what they want tomorrow, and that’s an Irish winner, but then there is a lot of names up on the leaderboard who will have issues with that.

“Winning the Irish Open is well up my leaderboard as far as wish lists of golf tournaments I would like to win, and to win would do many things like kick start my season and boost my Ryder Cup chances.”

He noted an Irish winner would also cap a good week for Irish golf, with Royal Portrush added to the British Open rotation, and Rory McIlroy committing to representing Ireland at the 2016 Olympics.

Ilonen confessed he wore an emerald-colored shirt to try and win over the large Irish crowds.

The Finn could have easily finished two clear when his attempted eagle chip shot at 18 lipped out, leaving a three-footer for his birdie.

“I decided to wear a green shirt today, and the fans were really pleased, but then I knew my course record wouldn’t last long and I called that,” Ilonen said.

“But I feel really comfortable out there, and really pleased to birdie 18, and get back the lead.”

Willett recorded his second hole-in-one of the year, after one at the China Open.

“It was a perfect number, wind out of the left with an 8-iron, kind of saying go in and not really quite sure, but it slam-dunked in the hole,” Willett said after his second 63 of the year.