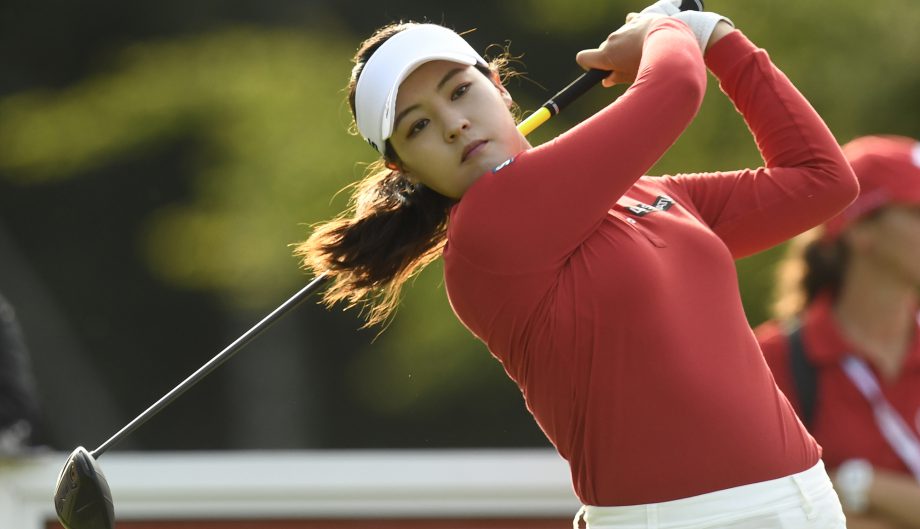 OTTAWA – Brittany Lincicome and Mo Martin will spend their Friday night splitting a pizza and probably talking about what it will take to catch In Gee Chun.

The two Americans were both 6-under par and leading after two rounds at the CP Women’s Open before Chun passed them on the leaderboard for a two-stroke lead by the end of the day. Lincicome and Martin had plans for a pizza party with their caddies and some other golfers about the same time Chun was finishing her 4-under round to sit at 8 under on the tournament.

Lincicome relies on her caddy, Missy Pederson, to make pizza from scratch at most tournaments. She even has an unusual go-to toppings combo.

“Sausage and pepperoni, and then this Mascarpone, which is like a sweet cream which is super weird,” said Lincicome in the early afternoon. “Everyone’s like, ‘oh, my gosh, what is that?’ But it’s delicious.

“My caddy found it at the British Open a few years ago, and now it’s a whole thing.”

Martin had four birdies on the back nine, including one on No. 18, to take over first from first-round leader Marina Alex, who teed off in the afternoon. Alex had a 1-under round to join Lincicome and Martin in second.

“Super-solid finish,” said Martin after her round. “It’s nice that things are coming together. I think I’ve been playing better than I’ve been scoring this summer, so nice to see those things connect.”

Lincicome tied it two groups later when she drained her own birdie on the par-5 523-yard final hole. Martin’s biggest concern after resting all afternoon was getting too lethargic from the pizza.

“It should be a fun night. Just need to stay active,” said Martin. “Try not to sleep in too much tomorrow morning, and I’ve got the same game plan and I’ll be ready to go. Just conserve energy for the weekend.”

Chun said that she doesn’t need to relax because she enjoys playing in Canada so much. Instead, she’ll stick to her usual practice routine.

“I will do the same,” said Chun. “I really enjoy playing on the course, I really like playing in Canada. So I’m just enjoying everything.”

Alex is going to spend her Saturday morning focusing her ball striking at the windy Ottawa Hunt and Golf Club.

“Just get a few better drives on the fairway and just a couple more closer iron shots and give myself better percentage putts,” said Alex. “I’m putting well, but I just want to give myself as many great chances as I can going through this weekend.”

Brittany Marchand of Orangeville, Ont., and Brooke Henderson of nearby Smiths Falls, Ont., were the only two Canadians from a field of 14 to make the cut.

Henderson had to birdie on her final hole of the day to slip under the cutline and finish at 1 under. The teenage phenom was followed from hole to hole by hundreds of fans, most wearing red and white, a tradition at professional golf tournaments in Canada. She acknowledged that there was extra pressure playing just an hour away from her hometown.

“I feel like I’ve handled it pretty well so far,” said Henderson. “I think now that the cut is kind of over with, I can focus on my game and try to shoot maybe 4- or 5-under these next two and see if I can be in the top 10 or just climb that leaderboard a little bit more.”

Marchand, who was playing two groups behind Henderson, was tied for 23rd at 2 under.

Quebec City’s Anne-Catherine Tanguay and Augusta James of Bath, Ont., as well as amateurs Maddie Szeryk of London, Ont., and Calgary’s Jaclyn Lee tied at 7 over.

Maude-Aimee Leblanc of Sherbrooke, Que., was 8 over, Hamilton’s Alena Sharp was 9 over, amateur Grace St-Germain of Ottawa was 10 over and Calgary’s Jennifer Ha was 12 over.

Hannah Hellyer of Sterling, Ont., was 14 over, Samantha Richdale of Kelowna, B.C., was 15 over and amateur Naomi Ko from Victoria was 16 over. Charlottetown’s Lorie Kane finished the day at 19 over.