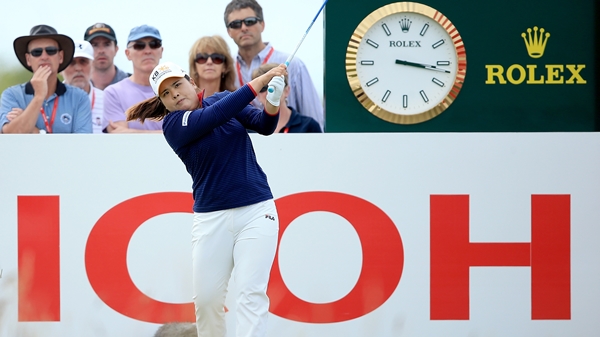 Instead of trying to win an unprecedented fourth straight major, Park has a chance to become only the seventh woman to win four of the LPGA’s majors. Instead of photographers capturing her every move at St. Andrews, the 26-year-old South Korean has gone about her work without fanfare at Royal Birkdale.

That changed Saturday with a remarkable start, and a late ruling that put Park in the lead.

On the tough opening stretch at Royal Birkdale, she ran off three birdies that sent her to a 4-under 68. Then, Park went from a one-shot deficit to a one-shot lead when Ahn Sun-Ju was penalized two shots after her round for building a stance in the bunker on the 18th hole.

The 18 holes remaining could be a sprint among a dozen players.

Park had a one-shot lead over a pair of major champions – Suzann Pettersen of Norway (68) and Shanshan Feng of China (69) – along with Ahn. Julieta Granada (72) and Amelia Lewis (71) were another shot behind.

Ahn appeared to be the player to catch after what she thought was a 69 for a one-shot lead.

She was summoned to the rules trailer, where officials determined she used her left foot to build her stance in a pot bunker left of the 18th green. Ahn was assessed two shots for violating Rule 13-3. Her par turned into a double bogey. Her 69 became a 71. And she went from a one-shot lead in the final group to having to make up ground against Park, the LPGA Tour’s reigning player of the year.

“It’s disappointing, but it’s my mistake and I have to follow the rules of the game,” Ahn said through an interpreter. “I still have a day to go and I have to stay focused and try my best tomorrow.”

The penalty also created a wide-open final round at Royal Birkdale.

Park was at 4-under 212, though 12 players were within three shots of the lead.

One of them was Charley Hull, the go-for-broke English teenager who made nine birdies early Saturday for a tournament-best 66 that suddenly put her into contention to become the youngest major champion in LPGA Tour history. She was at 1-under 215.

Also in the mix was Mo Martin, the 31-year-old American done in by a four-hole stretch on the back nine that sent her to a 77. She also was at 215, along with former U.S. Women’s Open champion So Yeon Ryu, who made one bad decision and one bad swing, both leading to double bogey. Ryu had a 74.

Defending champion Stacy Lewis had a 70 and was three shots behind.

Park has been virtually ignored all week, a big difference from last year. That could be about to change.

“Yeah, I start to feel a little bit of pressure from now and tomorrow,” Park said. “But I’d rather be having the pressure than not being in contention.”

Ahn took the outright lead with a 25-foot birdie putt on the 16th hole, and was poised to stretch the margin.

Her penalty on the 18th actually began with a photographer who took a sequence of pictures at the top of her swing on her second shot. She caught it heavy and pulled it left, into the bunker, as she and her caddie looked back to see who was the culprit.

She blasted out of the sand and over the green, and did well to get down in two putts. Only later did officials determine she had built her stance. She said the ball was on the slope of the bunker and it was hard to make a stance.

“So what I was trying to do was fix a stance,” she said. “But after the review, it was determined that I used my feet to try to make an even lie. My intent wasn’t to break the rules. It was just to set my feet firm in the sand just to be able to make the shot. But that’s the rule. There was no intent and I can’t do anything about it.”

A one-shot lead is next to nothing in golf. Three shots can disappear quickly. And what could make this Women’s British Open go down to the wire is the finish at Royal Birkdale – three par 5s over the last four holes.

“You can make a double so quick on this golf course that you’ve just got to keep hanging in there,” Lewis said. “I you get in trouble, get out, and just stay patient. If you make a bogey, it’s OK because you’ve got some par-5 finishing holes here.”