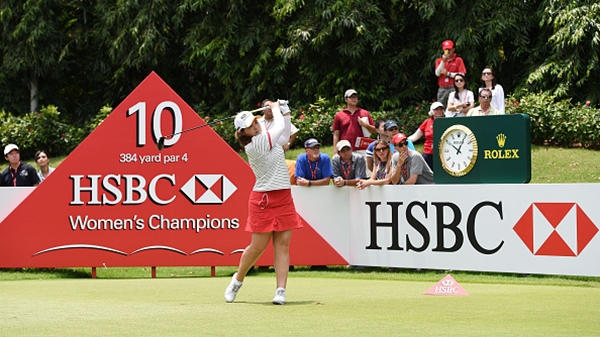 SINGAPORE – Inbee Park shot a 4-under 68 to take a two-stroke lead after the third round of the HSBC Women’s Champions on Saturday.

Park had four birdies in a bogey-free round at Sentosa Golf Club to sit at 13-under 203, two strokes ahead of top-ranked Lydia Ko and Stacy Lewis, who both shot 67.

“I gave myself a lot of opportunities,” said Park, who is seeking her 13th LPGA victory. “I didn’t make all of them, but I was able to handle myself out there being patient out there and no bogeys is a really great result.”

Anna Nordqvist had a 68 and was tied for fourth with Suzann Pettersen and Azahara Munoz, four strokes off the pace.

The 17-year-old Ko is bidding for her seventh career LPGA victory and her third win in as many weeks. She won the Women’s Australian Open two weeks ago and the Women’s New Zealand Open last week.

“That would be I guess a dream three weeks,” Ko said. “But I’m just going to try my best. The girls are playing good golf and it’s a tough course. Just one shot can cost you a couple.”

Lewis is third in the world rankings behind Ko and Park.

“The final group on a Sunday is where you want to be, so no matter – doesn’t matter who is in the group,” Lewis said. “This is the position I want to be in tomorrow.”

Defending champion Paula Creamer struggled with her game and shot a 74 to be tied for 50th with money list leader Amy Yang, who had four bogeys in a 78.

Michelle Wie fell into a tie for 38th after a round of 74 that included a bogey, a double bogey and a birdie.

Overnight co-leader Carlota Cinganda also had a 74 and is tied for eighth with Shanshan Feng and Jessica Korda.