Inbee Park shoots 66, leads after 3rd round at Westchester 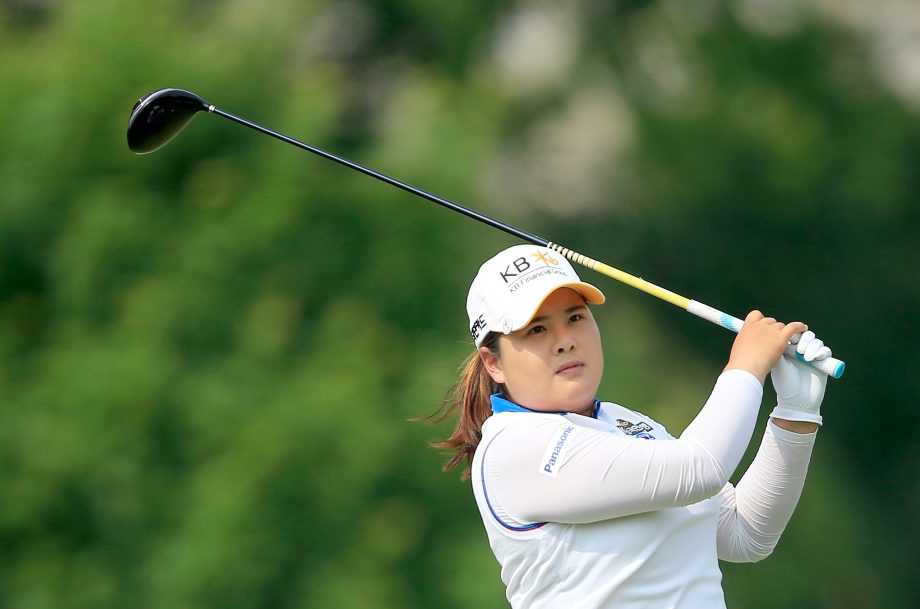 Park shot a 7-under 66 and overtook Kim on the final hole to take a two-stroke lead into the final round of the KPMG Women’s PGA Championship.

Kim, a rookie who came into the day with a one-stroke lead, shot a 69. The two had battled all afternoon each went into the final hole at 13-under par. But Park, who needed just 28 putts Saturday, made her seventh birdie of the day on 18, and Kim missed a 4-foot putt for par.

The 26-year-old Park said her experience in winning this tournament each of the last two years may give her a bit of an advantage Sunday over her 22-year-old countrywoman. Kim has won twice this season, but will be looking for her first major championship on Sunday.

“It feels like the first time is always hard, always hard to do and it puts extra pressure on yourself,” Park said. “But when you’re trying to do the second, third time in a row, it just feels like you’ve done your homework already. So you feel a little bit more relaxed and you kind of know how it feels like and how it’s going to play like.”

Kim said she plans to use the bogey on the 18th as “medicine” on Sunday to help her get better.

She also has a recent history that should give her some confidence. Kim beat Park at the Lotte Open in Hawaii by chipping in to force a playoff and holing out from 154 yards on the first sudden-death hole.

“Well, that’s a past story,” Kim said. “I want to write a new story tomorrow.”

A win here could allow Park to catch top-ranked Lydia Ko in the rankings. Ko missed the cut on Friday, ending her streak of 53 consecutive made cuts.

Park could also tie Annika Sorenstam (2003-05), who is the only golfer who has claimed this title in three consecutive years, an accomplishment Park would list among the most impressive in her career.

“I have to say it would be pretty close to winning three majors in a row,” she said. “That was my biggest accomplishment ever in my career, but if I’m able to do this tomorrow, I think that will definitely be like tied for first.”

Kim and Park will go into Sunday with some separation from the rest of the pack. Suzann Pettersen and 17-year-old Canadian sensation Brooke Henderson each shot a 71. They ended tied with Hall of Famer Karrie Webb for third place at 8-under par, six strokes back of Park.

Henderson is attempting to become the youngest winner of a major championship. She is also looking for a win that would assure her a spot on the Tour next year after being denied an age exemption.

“This year is definitely a learning experience for me,” she said. “It’s a year where I’m trying to play my best and get my card for next year … whether it’s the money list or the win this year, or go to Q-School. My goal is to have full status next year.”

At the other end of the spectrum is Webb. The 40-year-old is attempting to become the second-oldest winner in the 60 year history of the event. Webb was in second place to start the day, but had to overcome bogeys on her first two holes to shoot a 72. She will be trying to win her eighth major.

“If I had told you I was going to shoot 1-under today, I wouldn’t have thought I was going to be six behind,” she said. “It’s going to take a big round tomorrow from me and probably some help from the leaders.

Pettersen is on a hot streak after winning last week in Ontario, for her 15th tour victory, her first since October 2013.

Morgan Pressel is in sixth place. She went 5-under on the back nine to finish a round of 69, including an eagle after on 18.

“When I got to the 18th tee and I saw that the tee was moved up a little bit, plus it was downwind, I said to my caddie, I said definitely we can get there today if we hit a good drive and I did,” she said.

Brittany Lincicome, who won the first LPGA major of the year at the ANA Inspiration, moved into contention and a three-way tie for seventh place.

After dropping two strokes the first eight holes, she made five consecutive birdies on the ninth through 13 holes. The 29-year-old American picked up a sixth on the 15th hole and had a birdie putt lip out on No. 17. She finished with a 69.

“I always like to be coming from behind,” she said. “I don’t like leading after two or three rounds because it makes me more nervous, I have to do more interviews and there’s more attention, so if I’m coming from behind and chasing people, it seems to be more of my comfort zone.”

Hamilton’s Alena Sharp shot a 2-over 75 and is tied for 47th entering Sunday. Sharp is 2-over for the tournament.