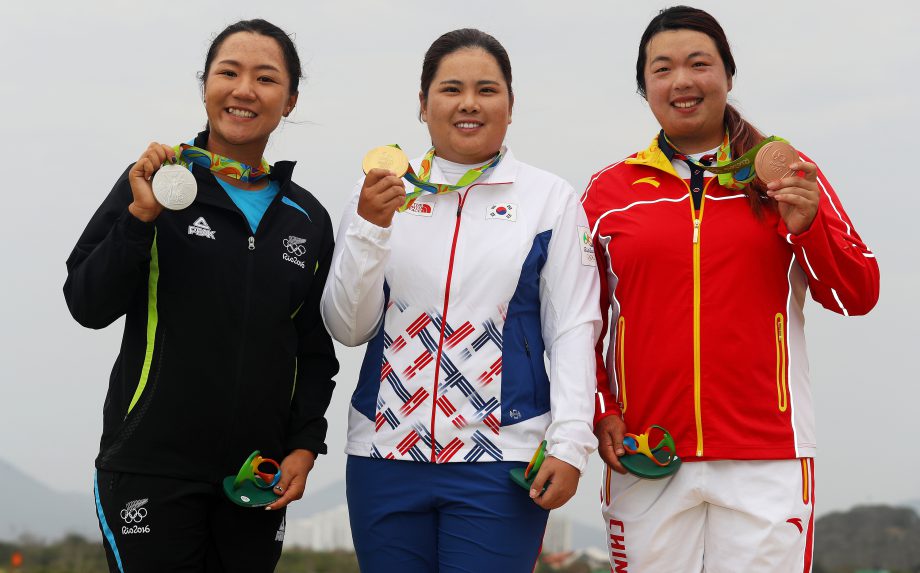 RIO DE JANEIRO – Inbee Park added another accolade to her Hall of Fame career following a precision putting performance to capture Olympic gold. A final-round seven-birdie, 5-under 66 – including birdie putts from nine, 10, 25 and 26 feet – provided the native of South Korea with yet another milestone in a landmark career highlighted by seven major championships and a total of 17 LPGA Tour victories. Park finished the competition 16-under 268, five-strokes clear of second-place.

World No. 1 Lydia Ko birdied three of her final five holes, including a dramatic eight-foot birdie putt on No. 18 to capture the silver medal at 11-under, while Shanshan Feng of China finished with bronze at 11-under.

Canada’s Brooke Henderson began the day with a share of 8th, following a third-round 75. The native of Smiths Falls, Ont., opened her final round with a bogey, but settled in for the remainder of the day, carding six birdies en route to a 67 to finish in a three-way tie for 7th alongside Australia’s Minjee Lee and Great Britain’s Charley Hull. A final-round 69 from Alena Sharp earned the Hamilton native 30th-place.

“It was a tough finish for me, but I fought back today,” reflected Henderson. “I bogeyed the first hole today, so I’ve been 5-under the last 17 holes which is really cool. I learned a lot about myself on and off the course this week which I think is always a good thing and it will be really important moving forward for the rest of the season.”

“She certainly created enough chances to warrant a chance at some medals. Obviously the finish yesterday put her in a spot where she had to play awesome today and I honestly think she did. It could have been lower today with some of the putts that she created chances with and had an opportunity and maybe didn’t convert as many as she’d like. It’s nice to be able to shoot 4- or 5-under-par and not converting as many chances as you’d want. It shows you just how well she played. But I think she’ll build off of this momentum for next week which is an important week for us.”

“I’m proud of how she played and I know when she walks away and really looks back, I think she will be, too,” he added.

The Canadian will now set her sights on the 2016 CP Women’s Open. She will be joined by both the bronze and silver medallists, with Ko aiming to defend her title at Canada’s Women’s National Open Golf Championship. Before making her way to Priddis Greens Golf & Country Club for the August 22-28 tournament, Henderson plans to continue to take-in the Olympic experience.

“It’s been really fun; It’s been really cool,” said the 18-year-old when asked about her time in Rio. “Seeing the other athletes around the village, just watching them train a little bit, watching them when they’re relaxing or partying is just really cool, just to see the different things and I’m hoping to go see some events later tonight and hopefully tomorrow as well.”

Henderson did not shy away when asked about the impact of the Olympics on the state of the sport.

“I know for the men, it made a huge difference, so I’m hoping as well for the women, but you know, just being the Olympic Summer Games, we had audiences that golf doesn’t necessarily get all the time. I think it was really good for growing the game and improving it. I saw some young kids here today, and more and more, I see them starting to pick up the game or start to follow it a little more closely, so that’s really important to me, and hopefully I inspired somebody to play a little bit better.”

“I think it’s fantastic,” added Mullally. “I do feel like inside the ropes, this felt like a major championship in terms of how the course played and how it was set up. Outside of the ropes, it was very special. You get to rub shoulders with some of the best athletes in other sports in the world and really realize how important this is for them, which does have an effect. I think when you see how people hard people work and how lucky we are in golf, I think that brings another dimension into what you get to do day-in and day-out. I hope golf stays in the Olympics forever and I think if we can continue to have events like this, it should.”