Internationals have best shot at rare win in Presidents Cup 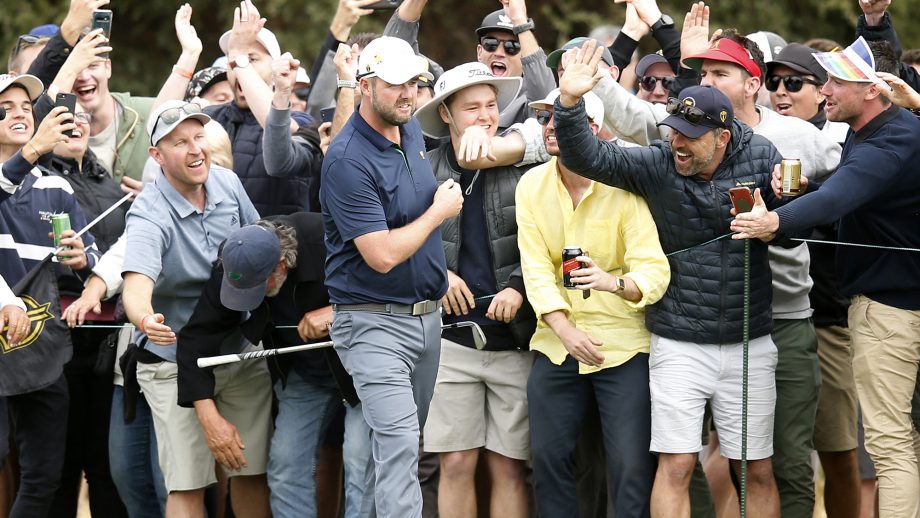 MELBOURNE, Australia – The final round of the Presidents Cup began with words from the captains, not singles matches.

The International team took its first lead into Sunday singles since 2003, all because of two foursomes matches in which the players never led at any point until scratching out a half-point.

That gave the Internationals a 10-8 lead and needing six points from 12 singles matches to win the Presidents Cup for only the second time in the event’s 25-year history, and not since Royal Melbourne in 1998.

“For us to scratch and scramble for one point, the guys were very excited about that,” International captain Ernie Els said.

Marc Leishman and rookie Abraham Ancer were 5 down with eight holes to play. The rookie duo of Joaquin Niemann and Byeong Hun An were 2 down with five to play. Both rallied to halve their matches.

U.S. captain Tiger Woods – and that’s all he was on Saturday, a captain – saw it differently.

Woods looked back to Friday, when the International team won two matches for a 6-1 lead, and was ahead briefly in the other three foursomes matches. The Americans won two matches and halved another to limited the damage.

“At one point, it looked like we were going to be down 1-9,” Woods said. “And for the International team only to get one point from that point on, for us to fight back and get eight points was a huge, huge win for us today.”

Els couldn’t stifle a laugh when he heard that. His team was ahead on Friday, but it never had more than a five-point lead at the conclusion of any match.

“You’re the absolute optimist, aren’t you?” Els said to Woods without looking his way. “My God.”

That’s what both were filled with – optimism – after a long day filled with big wins, a stunning comeback that left Justin Thomas seething, and more drama involving Patrick Reed at Royal Melbourne.

Els has a record-tying seven rookies on his team from a record nine countries, and he has given them purpose with a new logo and a strong dose of analytics to find the right combinations. So far, it has worked.

Woods is the first playing captain in 25 years, and he was questioned for taking himself out of both sessions, even though he has performed as well as anyone at Royal Melbourne. He said he had faith in his players, and they delivered their first winning session Saturday afternoon in foursomes, nearly sweeping it until the great comebacks by Leishman and Ancer, An and Niemann.

Woods put himself in the leadoff position for singles. Els anticipated that’s where he would play so that Woods could quickly return to captain duties when his match was over. He sent out Ancer, the International star in these matches so far, unbeaten in all four matches.

Woods has lost only once to an International player in singles away from home – Mike Weir in Canada in 2007, when the Americans were well on their way to winning again.

Captains alternate turns filling out the lineup, and Woods offered up Reed in the third match to face C.T. Pan of Taiwan, who has wielded a hot putter this week. Along with getting Reed out early, placing him against Pan kept Reed from facing one of three Australians on the International team.

It’s already been a rough week for Reed because of his rules violation last week in the Bahamas, when he brushed back sand behind his ball – twice – playing from a waste area. He was penalized two shots.

The gallery has taunted him all week – Reed usually embraces that – by calling him “Patrick Cheat” or introducing him as “The Excavator.” But it was too much for his caddie, brother-in-law Kessler Karain. He confirmed in a statement to Barstool Sports podcast “Fore Play” that he shoved the spectator because he got too close as he cursed Reed.

“We all are focused on winning the Presidents Cup,” Reed said in a statement. He has declined interviews since Friday and is 0-3 in his matches this week with Webb Simpson.

Singles has long been considered a strength of the Americans, but they have not won the singles session since 2009. They haven’t really needed to because of their dominance in the Presidents Cup.

Leishman and Ancer showed plenty of grit. Ancer made a 20-foot birdie putt to halve the 15th hole and extend the match. Leishman made an 18-footer on the next hole, and Rickie Fowler missed a 6-footer that would have won the match. Thomas missed a 10-footer after Fowler’s long putt raced by the hole, and then Thomas hit a tee shot under a tree on the 18th that left Fowler having to squat just to punch out. Leishman stiffed his approach, and the birdie putt – and halve – eventually was conceded.

“It’s unacceptable for us to get a half a point,” Thomas said. “They made a couple long putts there on 15 and 16 to keep it going. We had our chances, and I mean, flat honest, just didn’t execute. … Our team is playing well today, and we’ve got to put it behind us and go get a point tomorrow.”

After three days of team matches, that’s all that matters now.