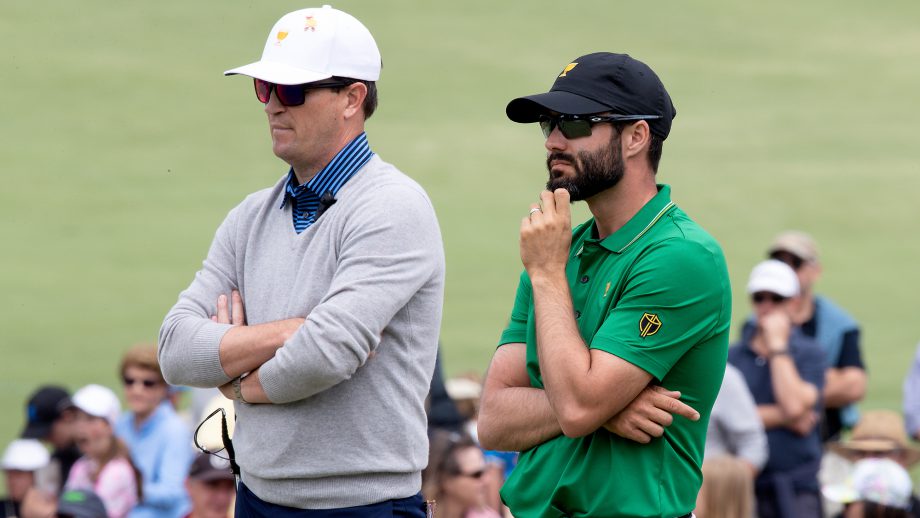 MELBOURNE, Australia – The fist pumps, the screaming and shouting, it all belonged to the Americans in the final hour of the Presidents Cup.

They just didn’t have the lead.

That’s the beauty of these team events in golf. Momentum can change with one putt that leads to one point. Patrick Cantlay and Justin Thomas provided those moments Friday in foursomes at Royal Melbourne, and the U.S. team walked off the course believing the Presidents Cup was about to turn in their favour.

“What are we, 6 1/2-3 1/2 up? It’s very early,” Leishman said. “They made a couple good putts on 18, definitely give them that, but I don’t think you get momentum with two putts. We played pretty well the first two sessions. Yes, today probably didn’t finish off the way we wanted to, but we still halved the session.

“They made a couple putts at an important time, but if they feel that, that’s great,” he said. “We probably don’t feel that way, so, yeah.”

The Americans had a right to celebrate, for no other reason than it could have been worse.

“We dug ourselves out of what could have been a big hole,” Thomas said.

Louis Oosthuizen and Adam Scott won big, rallying from 2 down to 3 up in a span of seven holes over Dustin Johnson and Matt Kuchar. Leishman and Abraham Ancer had control the entire way against Webb Simpson and Patrick Reed, who heard it from the gallery over his rules violation last week in the Bahamas. One fan called out to him, “Patrick Cheat.”

The board was filled with black-and-gold, and captain Ernie Els had reason to think it could have been a clean sweep.

And then it changed.

Cantlay was so excited with his 15-foot birdie putt on the 18th to win the match that he pumped his fist. That’s a lot of emotion for Cantlay, and it was meaningful to flip the match with Xander Schauffele and beat Adam Hadwin and Joaquin Niemann.

Thomas is more excitable, and this started on the bus ride to Royal Melbourne. Thomas loves looking at video, and one of his favourites was Hall of Fame receiver Terrell Owens screaming about his greatness. If the moment presented him, Thomas was ready to go all T.O.

That moment came on the 18th, when he and playing captain Tiger Woods were caught in a battle with Hideki Matsuyama and Byeong Hun An, who won three straight holes in the middle of the match and were tied going to the final hole.

Woods hit a great approach to 18 feet beyond the hole. Thomas made the putt.

Both dropped their putters and Thomas screamed, “I love me some ME!” as Woods rushed toward him with arms outstretched for a fierce hug.

“I showed it to the guys this morning,” Thomas said of the video. “It’s a really funny video. I said, ‘If I make a big putt today, I’m yelling it.’ Today, that was a pretty big putt, so I thought it was the appropriate time to yell it.”

Gary Woodland and Rickie Fowler delivered a halve that felt like a win, going from 2 down with three holes to play with two straight birdies to end with the only draw of the week.

Emotionally, the Americans felt they had all the momentum.

“Making those putts on 18 were so big for the momentum shift,” Cantlay said. “I felt like all day out there, it was another beating and we were getting beat up. I looked up on the board and we were down in almost all the matches, all day. We’re going to go to bed tonight feeling great and we’re going to have the momentum going into tomorrow. We are still down, but there are a lot of points up on the board for tomorrow.

“I really thought this afternoon was huge, and I think it’s going to be a big paradigm shift going forward.”

Els and his International team were able to see a bigger picture. It had a three-point lead, and even with the late American rally, the foursomes sessions was a draw. The Americans had a 30-point advantage in the alternate-shot format in Presidents Cup history.

“It’s perspective, isn’t it?” Els said. “I’ve got to look at where we are. It’s easy to just look at where we could have been, because it was looking really unbelievable. We tie this afternoon. We’re in a very good position.”

Next up was a double session Saturday – four matches of each format in the morning and afternoon.

Woods sat himself out for Saturday morning for the first time this week, sending Thomas out with Fowler. Only after Saturday will anyone have a clear idea of who has the momentum and the advantage for the final day.

It can change at any minute.