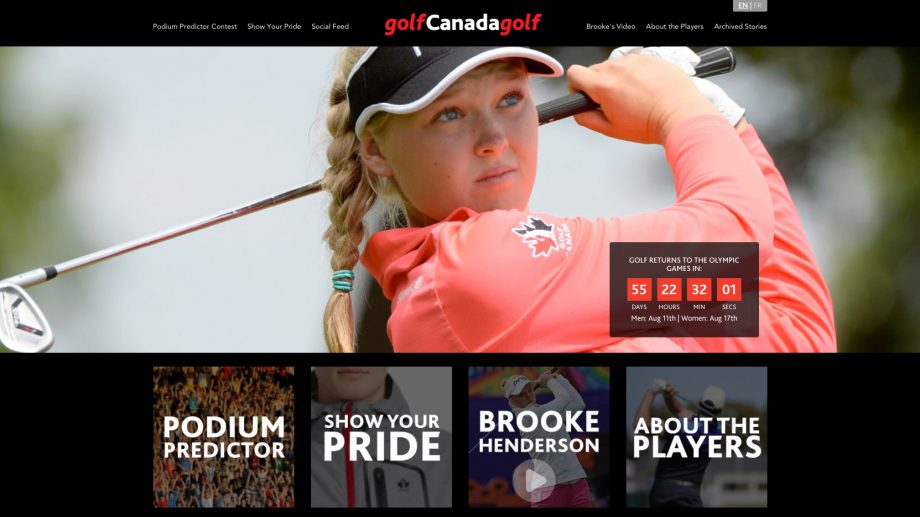 In celebration of golf’s imminent return to the Olympic Games in Rio this summer, Golf Canada, its NAGA partners, the 10 Provincial Golf Associations and MacKenzie Tour – PGA TOUR Canada are proud to join forces again to announce the launch of the Golf Canada Golf Podium Predictor Contest – just one of the many new features of the newly revamped golfcanadagolf.ca site.

“2016 is an exciting year for golf in Canada.” says Peter Kirkpatrick, Managing Director of Brand and Marketing Services at Golf Canada. “With golf’s return to the Games, and Canada’s status as defending champions (Canadian George S. Lyon won the gold medal in 1904, the last time golf was contested at the Olympic games) our team at Golf Canada felt it was important to give Canadians the opportunity to share in the excitement. It’s our hope that the enhancements to the golfcanadagolf.ca site, including the contest, will increase the awareness for golf in the Olympics and ignite passion and pride for the game itself.”

The contest gives participants the opportunity to show off their prognostication skills by stating their predictions for who will win Gold, Silver and Bronze medals this summer.

One lucky entrant will walk (or fly rather) away with the Grand Prize of an amazing golf vacation for two in Whistler, B.C., courtesy of Tourism Whistler.

In addition, weekly random draws will be made for Team Canada Head Covers.

“They’re very cool and are becoming a must have for Canadian golf fans.” says Marianne Baker, Golf Canada’s Director of Brand and Merchandising. “I’m sure they will only get more popular when people see them on the clubs used by our Olympians in Rio this summer. They’re kind of our version of the Canadian mitts.”

golfcanadagolf.ca, launched in 2015, is an industry initiative that invites golfers and fans to share their golf stories and passion for the sport.

“We’re building a movement,” added Kirkpatrick. “And, it couldn’t be easier to join in using the #golfCanadagolf, the rally cry for all things great about golf in Canada.”