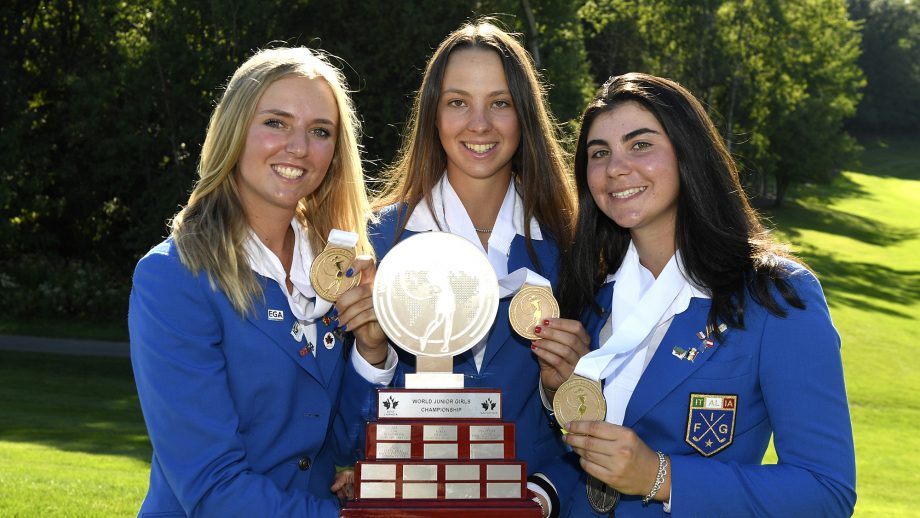 OTTAWA, Ont. — It was a hotly contested finale at Camelot Golf & Country Club in Ottawa on Friday but when all was said and done, after a sudden death playoff on the 18th hole, it was Italy who prevailed over the USA to capture gold at the 2018 World Junior Girls Championship.

The Italian team, who led by as much as 10 strokes earlier in the week, needed to find an extra gear after regulation play concluded with both countries tied at 22 under. It found it in the form of team stalwart Alessia Nobilio, who sank a final birdie in the last playoff group to capture Italy’s first medal at the World Junior Girls Championship. Nobilio’s teammates Caterina Don and Emilie Paltrinieri, who were waiting anxiously greenside locking arms with coach Enrico Trentin, rushed the green to congratulate the young Italian golfer who led her team all week with her splendid play.

It was a bittersweet defeat for the USA, who managed to close a nine-stroke gap yesterday, only to come up short in the end. But for the Italian team, the relief was palpable.

“We had a one-shot lead going into the last round and, you know, in a team event, anything can happen, one shot lead is really nothing,” said Paltrinieri, who was accompanied by her teammates and served as a de facto spokesperson for the team, post-victory. “When we came up to 18, we were quite close, we were actually behind, but Alessia made that great birdie on the finishing hole to force overtime,” added the young golfer from Parigi, Italy.

It is obvious that there is real chemistry between the three Italian girls, who recently competed as a unit at the World Amateur Team Championship in Ireland, placing 6th. That chemistry and mutual friendship serves them well. “When we came here, we celebrated Alessia’s birthday together, being friends is the key for our team, we support each other, when one of us shoots 6 under, we want the other one to shoot 7 under or 8 under,” chimed in Don.

The team spirit was key in acquiring the crown of World Junior Girls Champions for Italy. Joining them on the podium was USA with silver and Thailand with bronze. The Thai team were powered by the fantastic individual display put on by 15 year-old gold medalist Atthaya Thitikul, who shot the lights out at Camelot this week, setting the course record with a fantastic score of 60 (-12) on Friday. The round also contributed to a World Junior Girls Championship 72-hole tournament record of 20 under par. Nobilio took home silver, while American Zoe Campos captures the bronze medal. Brooke Seay of the USA finished fourth at 8 under for the week, while Canada’s Céleste Dao put up a solid score of 70 (-2) on Friday to finish in fifth place.

Additional information regarding the fifth annual World Junior Girls Championship can be found on the competition’s website.