It’s all about that plunk 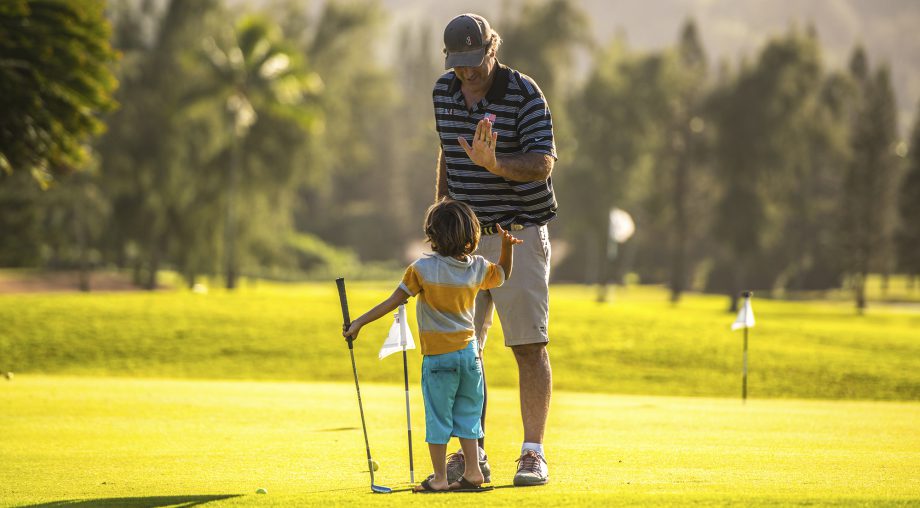 For a few years, the golf industry has been focused on ho w to get more young people- especially Millennials-to take up the game.  Another key to the sport’s growth lies in looking ahead to the next generation and spreading the golf gospel to those just getting a foot out of the crib.  After all, smacking the dimples out of little balls and chasing after them is an innate childhood pleasure right there with eating an ice cream cone.

My toddler’s favourite toy du jour is a Little Tikes golf set that distills the game down to its essentials.  First, you load a chunky plastic all-purpose club with a clear shaft with four coloured balls and depress a trigger to release spheres onto a tee or the ground.  Then, your little one simply tries to knock balls into a moveable flag adorned hole with a ramped lip that works just as well on hardwood and carpet as it does on grass.

My son’s first time playing he proceeded to flub a series of five-foot putts, missing every which way, before he had a brilliant idea.  Smiling, he stealthily grabbed the tee and repositioned it right next to the hole.  Next, he took his stance, pretending to deliberate over the significant putt ahead before bumping a blue ball right into the cup.

“Daddy I did it!”  He squealed while waving his club in the air and running multiple victory laps around the living room.

Who knew a centimeter tap in could elicit such wild-eyed excitement, boost confidence, and give a feller the intoxicating taste of a leader board-topping victory?  Long before one experiences the transcendental beauty of their first monster drive down the fairway or the sheer stroke-saving awesomeness of a chip-in, there is a small short tap that ends with lifted spirits and a rattle in the back of a cup.

Falling in love with the game is typically a slow seduction.  Casual golfers may flirt with breaking 100 for years before the deed is done; then, suddenly, they find themselves in a committed relationship, going steady with the nearest muni weekly and getting as intimately acquainted with the quirks and nuances of the 14 clubs in their bag as they are with their spouse’s equipment.

One of the oft-cited roadblocks to taking up golf is its relative inaccessibility to newbies.  Unlike soccer or tennis where first timers can immediately hit the field of play running and enjoy moderate success, attempting to play a round of golf without a few trips to the driving range, or a few lessons, is daunting.  Anybody who watched Tiger Woods’ flub filled 82 at the Waste Management Phoenix Open this past February understands golf is a game that can even humble its titans.

In a time when course closures are rising, and more folks are headed for the exits than joining the fray, industry players are realizing that old ways may need a swing adjustment.  Clinging to the refrain from one of Fiddler on the Roof’s catchiest ditties, “Tra-di-tion … Tra-di-tion,” won’t reverse the game’s fortunes.

Matty Du Plessis, a globetrotting home schooled 11-year-old from Quechee, Vt., – a nook of New England reminiscent of many a small town in Southern Ontario- is a breath of fresh air.  On YouTube, Vine, Instagram, and other social media spheres Du Plessis is known as MD_18undapar.  A golf rapper in the mode of Bubba Watson, Du Plessis has a knack for going viral.

“I like Lego and puzzles.  There isn’t a wrong shot so golf is like a 3-D puzzle,” pipes Du Plessis when I reach the precocious golf personality on Facebook chat and ask him about his attraction to the game.  Du Plessis is riveted by the problem-solving aspect of the game: being stuck with a lie right behind a tree and figuring a route out, having to hit over or under branches, or pulling off a mega slice to coax maximum yardage on a sharp dog leg right.

“When it doesn’t come off, sure it blows up your card but hey, you at least tried,” he explains.

For Du Plessis golf means having a great time; his infectious fun-first attitude has earned him thousands of fans.  “Hitting driver, making the ball move, sunset on the range, making the ball skip on a pond, thinking at first there is no way, but then making it happen.  There is just so much,” opines Du Plessis on why he loves to play.

In his popular “Stop, drop and make a 12 Foota” videos he sinks putts about as long as a Fiat 500 on the streets of Vermont, London, Cape Town, and even the center aisle of a Boeing 757.  His antics have caught the attention of a host of top tier media outlets from the U.K.’s Daily Mail to The Golf Channel.  If his handle isn’t a dead giveaway, Du Plessis’ ultimate goal is to shoot eighteen under par and play on the PGA TOUR.

While putting on uneven surfaces in his golf vignettes doesn’t help him read greens any better, holing out under taxing conditions certainly bolsters his confidence.  “If I can make a putt in a parking lot or in London or 30,000 feet above the Atlantic [in the aisle of a plane] with crazy moves, then making a putt from anywhere on a green is possible.”

When cultivating a golf affinity, long before fixations over equipment and lowering your handicap ever develop, the allure of the game can often stem from a desire to knock balls into holes-at least mine did.  Mini-putt at Meaford’s Memorial Park, a family-oriented campsite on the waters of Georgian Bay was my initiation into the game.  It remains the course I’ve logged my highest round count on.  You always remember the first time you beat your father in a competitive sport where he didn’t let you win.  After a couple summers worth of compiled course knowledge where I memorized hump apexes, optimum ricochet points to navigate dastardly walled in geometry, the pace necessary to jump a water feature, and the ideal spot to aim at the mystery box, so it spits your ball out in a jetstream toward the hole, I did the deed.  A two-stroke victory over my old man that at that time felt like I’d just won the Masters.  Instead of a green jacket my just as sweet reward was a Dairy Queen hot fudge sundae.  In case you’re wondering, Du Plessis celebrated the glorious milestone last fall by posting a pic of his winning scorecard on Instagram with the hashtag: “Beat-Your-Dad-Selfie.”

While the catalyst for golf to escape its current economic plugged lie may be around the corner (the plus 500-year-old sport always finds a way to keep rolling), there’s never been a better time to tap into the game and have a ball.  Whether that’s a toddler developing their hand-eye coordination by putting pine cones at backyard targets, a social media savvy pre-teen with a GoPro getting creative on YouTube or a mini-golf family outing that creates an indelible memory, it’s all a gateway to playing more golf and it bodes well for the game’s future.