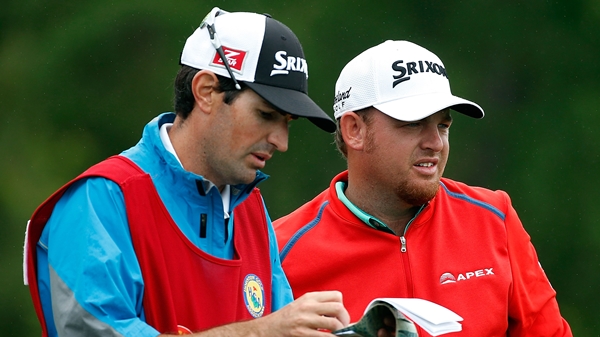 HOUSTON – J.B. Holmes used a strong start Sunday for a Houston Open victory in a three-way playoff against Jordan Spieth and Johnson Wagner.

The 32-year-old Holmes birdied the first five holes and nine of the first 12 after starting the day six shots back of Jordan Spieth.

He had a 64, the day’s low round, and won on the second playoff hole for his fourth PGA Tour victory and the $1,188,000 check. Although Holmes’ missed birdie putt had given Wagner another chance, his short putt for par lipped out.

“I knew I had to play a really low round and I started out great,” Holmes said. “It worked out for me.”

Spieth, the hottest player on the Tour heading into the Masters, was trying to win his second playoff in three weeks, sandwiched around a runner-up finish in the Texas Open last Sunday. But he bowed out on the first playoff hole after his approach shot landed in a bunker and, lying two, he couldn’t get anywhere close to the cup on his chip.

Wagner, who got into the field only through a sponsor’s exemption, admitted being “pretty bummed” by falling short but said he was hopeful his career is pointed in the right direction again. He was trying to become only the second player to get into the Masters on the weekend before, having done it previously by winning Houston in 2008.

Holmes’ final-day rally was the biggest on the Tour since Matt Jones also came from six down to beat Matt Kuchar in a playoff last April. The Houston Open has featured more playoffs than any tournament on the circuit.

Wagner and Holmes hit perfect drives on the first playoff hole – both were on No. 18 – while Spieth almost landed in the water, then wound up buried in the sand.

“I’m not sure what happened,” he said. “I heard something or maybe it was just me. It’s not an excuse. I got down in the sand and caught it fat and didn’t give myself a chance to continue in the playoff. But it was a great Easter Sunday.”

Earlier, Spieth had seemingly shot himself out of contention with a poor approach on No. 18, the hardest hole on the course. He wound up with a steep downhill lie and a bunker to clear. However, he chipped within 11 1/2 feet, then calmly made the putt.

Spieth was trying to become the second-youngest player after Tiger Woods to win a third PGA Tour event before his 22nd birthday. He also could have passed Jimmy Walker, who pulled out of the tournament before it began citing illness, for the current season’s points-standing lead.

“I felt very comfortable with more and more pressure going into Augusta, which has the most pressure anywhere,” he said.

Spieth earned his first PGA victory before he turned 20, but he’s still pursuing a breakthrough in one of the majors.

Beginning the final round with a single-stroke lead over three players, Spieth didn’t make a lot of noise early. Meanwhile, Holmes was shuffling the leaderboard deck, negating a birdie on the third hole with a bogey on the sixth, then stringing together six pars together.

But he reclaimed a piece of first place with birdies on 13 and 14, giving his fans, including his parents who had come down from Dallas on Sunday, a jolt of energy.

Holmes began the day as an after-thought, tied for 18. But he turned the corner having shot a 29, tying the tournament course record for the front nine. His birdie on No. 8 pulled him even with Spieth and another on No. 9, coupled with a Spieth bogey back on six, gave him a lead he wouldn’t relinquish before he left the course to await his fate.

“I’ve been working on taking it one shot at a time,” Holmes said. “I did a pretty good job of that today.”

When he got to 9 under through only 12 holes, speculation began as to whether he might have a 59 in him. He didn’t. A bogey on the par-3 16th hole also cost him a shot at breaking the 18-hole course record of 63.

Of the three players tied for second through 54 holes, only Wagner contended Sunday.

Scott Piercy, who had tied the tournament course record with a 63 Thursday for the first-round lead, faded gradually and wound up five shots back. Austin Cook, one of four qualifiers to earn spots in the field, got to 15 under through eight holes but struggled with bogeys the rest of the way – including the last three holes – to finish six behind in 11th place in just his second PGA Tour event.

Three-time Masters champion Phil Mickelson was only a shot off the lead through 36 holes. But he began the day, like Holmes, six strokes back, having shot 75 Saturday with three consecutive closing birdies. Although he birdied the first hole, the tournament’s 2011 winner never made a serious move and posted a 71 to wind up in a 17th-place tie, seven shots behind Holmes.

Eight spots back in a tie for 25th were Canada’s David Hearn and Adam Hadwin. The duo finished at 8-under 280.