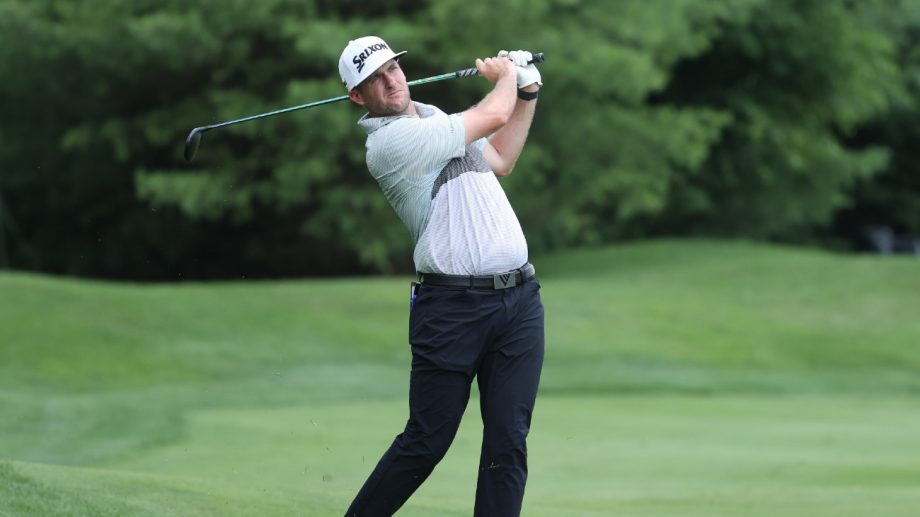 NICHOLASVILLE, KENTUCKY - JULY 16: Taylor Pendrith of Canada plays his second shot on the 11th hole during the second round of the Barbasol Championship at Keene Trace Golf Club on July 16, 2021 in Nicholasville, Kentucky. (Photo by Andy Lyons/Getty Images)
Canadian Press

NICHOLASVILLE, Ky. (AP) – J.T. Poston shot a bogey-free 6-under 66 on Friday to take the second-round lead in the PGA Tour’s Barbasol Championship.

Poston had a 13-under 131 total at rain-soaked Keene Trace in the tournament that was delayed twice Thursday because of rain and lightning. Because of the wet conditions, players were allowed to use preferred lies in the fairways.

“It’s been really good,” Poston said. “Just ball-striking’s been a lot better than I’d say it has been the last few months. Just nice to give myself a lot of looks. They’re bent greens, it’s soft. Hit the ball close to the hole and you can make a few putts, too.”

Poston had late birdies on the par-4 seventh and par-5 eighth in the round that began on No. 10. The 28-year-old former Western Carolina player won the 2019 Wyndham Championship in Greensboro for his lone PGA Tour title.

“They’re a lot like what I grew up on in Hickory, North Carolina,” Poston said. “They’re bent and they’re about the same speed as what I’m probably used to when I was a kid. Just kind of brings back some good memories of putting on that putting green growing up. It just feels normal to me.”

Ryan Armour and Joseph Bramlett were a stroke back, each shooting 67.

“It was softer today,” Armour said. “Definitely that rain yesterday afternoon, the two rain delays we had, I was not getting any bounce on the driver, it was kind of hit and plug, which I would love it if it would bounce a little more, the length I hit it, but I’m still able to get to three of the par 5s, which is good for me.”

Pendrith finished his late afternoon round in the rain.

Defending champion Jim Herman was 7 under after a 70. He won in 2019, and the event was canceled last year.

Will Grimmer, tied with Stuard for the lead after wrapping up an opening 64 in the morning, shot a 74 in the second round to drop to 6 under.

Wilco Nienaber, the big-hitting South African who received a foreign exemption to play, had a 71 to get to 5 under.

John Daly missed the cut with rounds of 76 and 70.