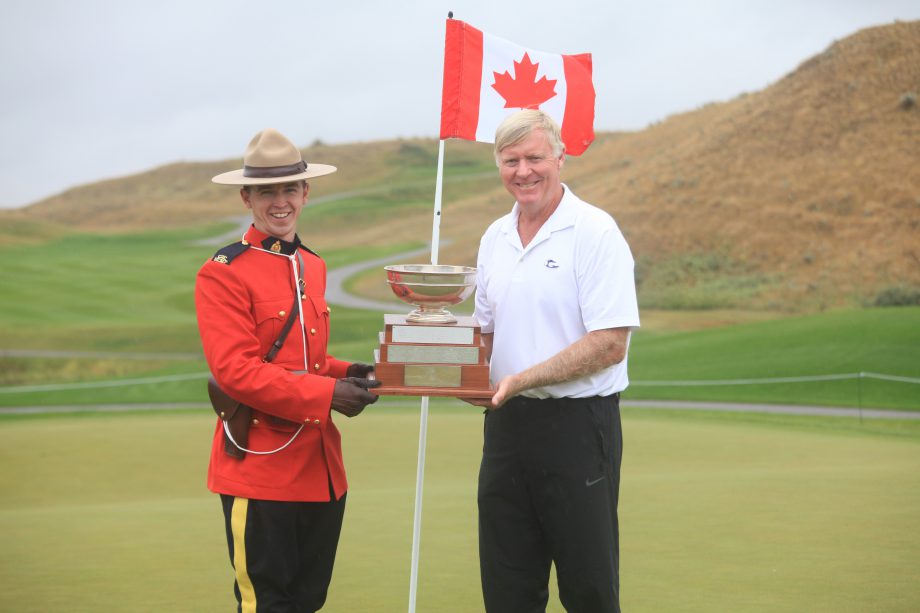 Hall, 58, battled through rainy conditions on Friday to shoot 1-over par 73 to claim a narrow one-stroke victory that was not decided until the final hole.

“There are three big international tournaments that Americans look forward to playing in, one’s the British, one’s the Canadian and one’s the U.S. Senior Amateur. To have one on my resume is there forever and I enjoy it – love it,” said Hall, who captured his first international title.

“I’ve played a lot in the states and I’ve had a lot of good accomplishments, but once you’re in the international side of it, I just think it’s wonderful. So to me having won this, words can’t explain it,” he added.

Although wind-swept conditions postponed play and ultimately reduced the championship to 54 holes, Hall welcomed the added adversity. “It was challenging, let’s say that for sure. I played with a couple of Canadians who said it was cold and that made my day. It was the right golf course to handle those kinds of conditions. I thought the weather made the tournament. We’re getting older, but we like challenges too.”

Hall recently claimed the 2015 Georgia Mid-Amateur Championship and has played in over 30 United States Golf Association events. With the win, he has earned an exemption into the 2015 U.S. Senior Amateur Championship taking place at Hidden Creek Golf Club in Egg Harbor Township, N.J., from September 26 to October 1.

“It gives me more confidence, but I think the real plus for me is knowing that I can putt well. These greens here were absolutely wonderful. I think coming away from this event, I trust my speeds more and it gives you more opportunities to make more putts,” Hall explained, as he sets his sights on the competition ahead.

Pat Thompson of Asheville, N.C., and Hall entered the final hole deadlocked at 7-under par, but Thompson dropped a shot on the 18th to finish with a share of second. The 57-year-old began the national championship with a senior’s course record of 7-under 65 and led after 18 holes.

Fellow North Carolina native Paul Simson of Raleigh shot the low round of the day at 2-under and climbed four spots into a share of second with a three-round total of 210. Simson claimed victory at the 2010 Canadian Men’s Senior Championship and made history by becoming the first person to capture the British, U.S. and Canadian senior titles in the same year.

David Schultz of Calgary finished as the top Canadian in the field with a fourth place finish at 1-under par. The 2013 champion fired rounds of 72, 71, and 72 in order to finish with a one shot edge over fifth place.

With a score of 16-over, George Stokes of New Hamburg, Ont., claimed a one-shot victory in the Super Senior (70+) division which was contested over the course of the first two rounds.