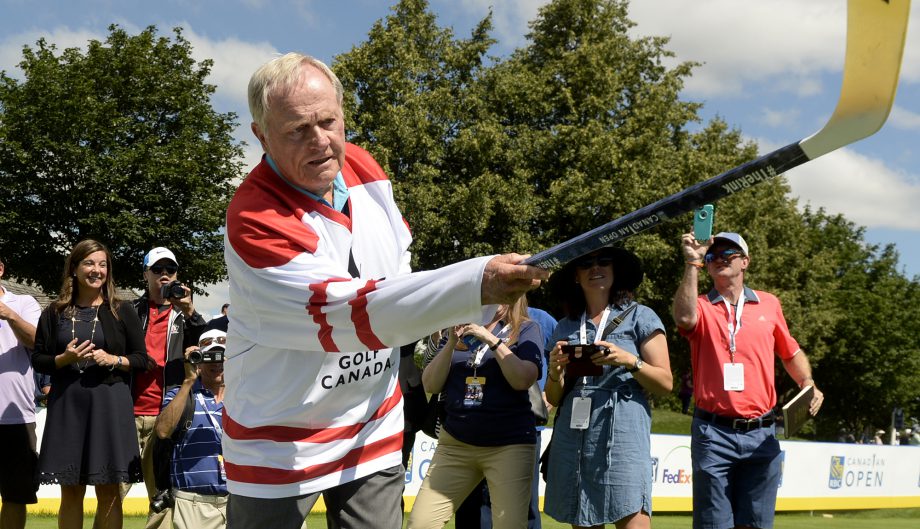 Golf legend and 73-time PGA TOUR winner Jack Nicklaus was on hand at Glen Abbey Golf Club in Oakville, Ont., on Tuesday to help kick off the 2017 RBC Canadian Open.

Following a ceremonial airshow and opening remarks, amateur champion Judy Darling Evans and legendary golf club maker Bob Vokey were officially inducted as the 78th and 79th honoured members of the Canadian Golf Hall of Fame. Nicklaus, who was inducted into the Hall in 1995, joined 16 other legends of Canadian golf as part of the celebration.

After the opening ceremony, the Golden Bear made a quick stop at The Rink on the par-3 7th hole to try his hand at hockey.

Jack Nicklaus grabbed a hockey stick for the first time during Tuesday’s opening ceremony at the @RBCCanadianOpen. pic.twitter.com/8AFgaWu6Z4

For nearly a decade, the name Judy Darling Evans was synonymous with amateur golfing success. She was born on October 6, 1937 in Montreal and was first introduced to the game at Whitlock Golf Club where her grandfather, J.A. Darling—a Quebec Amateur champion himself— served as the club’s first president… Read more on Judy Darling Evans here.

Bob Vokey was born in 1939 in Montréal, Québec. and credits his early inspiration in club design to the summers he spent with his father, a fine tool and die maker who had a penchant for golf and enjoyed tinkering with equipment… Read more on Bob Vokey here.

Photos from Tuesday’s Opening Ceremonies can be found on the RBC Canadian Open Facebook page here.

Click here for more information on what’s happening at the 2017 RBC Canadian Open.