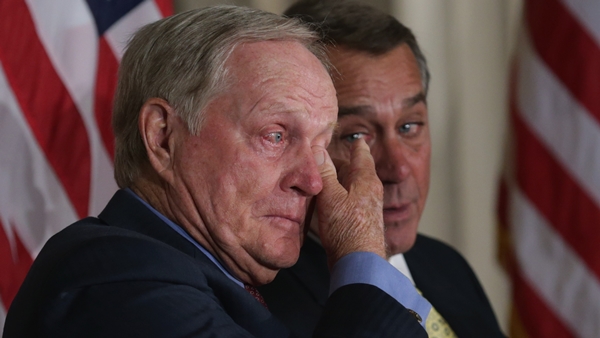 Congress awarded its highest civilian honour to golfing great Jack Nicklaus, who accepted the gold medal with a few tears, humility and humour.

In a ceremony in the Capitol Rotunda, the House and Senate leadership bestowed the award on Nicklaus, winner of 18 major championships that Speaker and avid golfer John Boehner called the “gold standard.”

Congressional leaders of both parties presented Jack Nicklaus with the Congressional Gold Medal to recognize the legendary golfer’s achievements on and off the golf course.

The 75-year-old Nicklaus recalled the hard work of his parents, praised his family and paid tribute to his wife, Barbara. He recalled that when his son Jack was six, he was asked what his father did for a living. The younger Nicklaus said, “nothing, he just plays golf.”

An emotional Nicklaus told his family that his whole life he wanted to make them proud of him, and “hopefully I have.”

The speakers, from congressional leaders to Nicklaus’ son, recalled the drama of the golfer’s 1986 win at the Masters. They praised Nicklaus’ charitable work, including the Nicklaus Children’s Health Care Foundation, which recently pledged $60-million to the Miami Children’s Health System.

Senate Majority Leader Mitch McConnell, R-Ky., said Nicklaus had a brush with polio as a teenager. McConnell said that as a fellow survivor of polio he appreciated Nicklaus’ perseverance.

Attending the ceremony for Nicklaus was golfing legend Arnold Palmer. The Ohio State marching band performed for the Ohio-born Nicklaus.