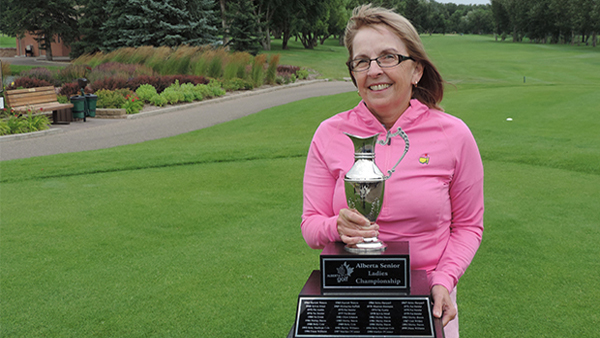 Jackie Little of Port Alberni, B.C. won her second consecutive Alberta Senior Ladies Championship, facing winds up to 60km/h in the final round.

“Conditions were challenging, and that makes you focus in a little bit harder,” said Little, following her final round 75 which gave the BC Public Player her second consecutive Alberta Senior Ladies Championship title.

Following her victory, Little explained that although winning is important, even more so is the camaraderie she shares with her competitors.

“Everyone is trying to compete and win, but championship is secondary; it is more about seeing everyone and enjoying the company of the ladies,” said the two-time Canadian Women’s Senior Champion.

Growing up in Edmonton and playing at the Glendale Golf Course, Little has a long history of playing golf in Alberta.