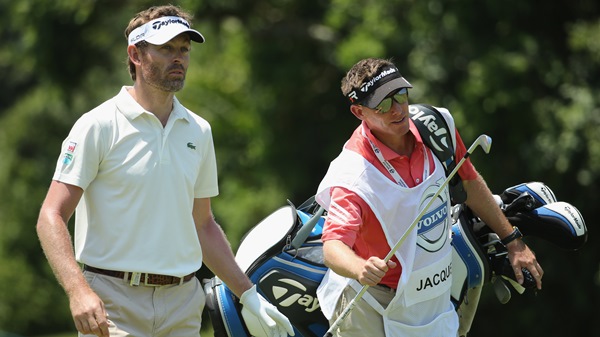 DURBAN, South Africa – Raphael Jacquelin shot a bogey-free 5-under 67 in extremely windy conditions on South Africa’s east coast to take the first-round lead at the Volvo Golf Champions on Thursday.

Jacquelin was the only player in the 36-man field not to drop a shot around Durban Country Club for a one-stroke advantage over defending champion Louis Oosthuizen.

Darren Clarke, whose last title was at the 2011 British Open, was tied for third (69) alongside Victor Dubuisson.

Race to Dubai leader Thomas Bjorn was last after a 7-over 79 which included two double bogeys on the back nine, giving last month’s big-money winner at Sun City a tough start on his return to South Africa.

Jacquelin is competing in his first tournament in around six weeks, but the Frenchman picked up shots at Nos. 6 and 8 and finished with three birdies in his last five holes to stay just ahead of Oosthuizen.

“I’m better when the conditions are difficult and I just seem to score better whether it is in the wind or in the rain, or if the course is difficult,” Jacquelin said. “I also stayed focused all day long and when you manage to save par in these conditions you are always going to have a good round. That’s the way I like to play.”

Oosthuizen, the 2010 British Open winner, came into the event following a frustrating 2013 marred by a nagging back complaint. However, the blustery coastal conditions played right into the hands of the South African.

“I grew up in Mossel Bay where the wind was born and then goes out to the rest of the country,” he said. “So the conditions today were very much like back home and what I have been used to most of my life … It’s just good to get the feel of playing and competing again after all the weeks off.”

Clarke and Dubuisson – the reigning Turkish Airlines Open champion – both returned 69s, with Clarke already showing the benefits of a new fitness regime.

But only 16 of the 36 players managed to break par in the testing conditions, with Denmark’s Bjorn, Spanish veteran Miguel Angel Jimenez and South Africa’s former Masters champion Charl Schwartzel all struggling.

Bjorn, who won the biggest check of his career at Sun City in his last tournament, bogeyed his first hole, added another two bogeys and two doubles and couldn’t make a birdie.