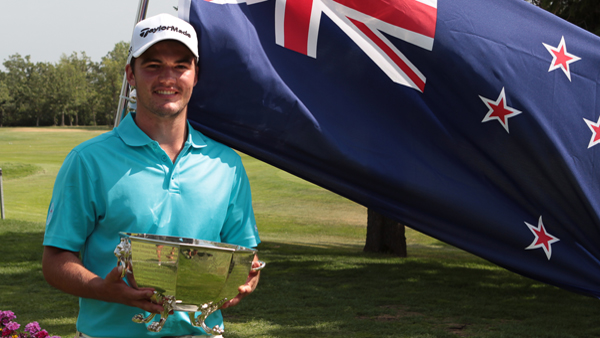 Winnipeg, Man.  – James Beale claimed the 2014 Canadian Men’s Amateur Championship title after rolling in a long birdie putt on the third playoff hole at Elmhurst Golf and Country Club.The New Zealand native finished 72 holes tied atop the leaderboard alongside Team Canada’s Taylor Pendrith and California’s Jonathan Garrick at 6-under par. The trio battled it out over three holes before Beale’s 22-foot birdie putt found the bottom of the cup on the par-4 18th hole. “Honestly I don’t know if it’s good or bad but the thought went through my mind just as I was standing over it that this is for the win,” said Beale when describing his winning putt. “As I looked at the hole I just kind of stroked it and tapped it down there and it just tracked towards the hole and I couldn’t believe it.”The 21-year-old carded a final-round 1-under 69 and drained a clutch par-putt on his 72nd hole to earn his spot in the three-man hole-by-hole playoff for the national championship title.“It’s surreal it’s definitely something I’ve dreamed about, I didn’t think it would happen so soon,” he continued. “I’ve been working on my game hard and 2014 is the first year where I’ve really started to feel like I get everything out of my game.”With Beale’s victory he earns an exemption into next week’s U.S. Amateur Championship and also the 2015 RBC Canadian Open at Glen Abbey Golf Club in Oakville, Ont. “Just added benefits, it’s amazing,” he stated. “I wasn’t thinking about that stuff when I was out there but to get off and realize that I’m in the U.S. Amateur and the Canadian Open a PGA Tour event, it doesn’t get much better than that, I’ll have to reconsider turning pro next year so I can play in that one.”Pendrith of Richmond Hill, Ont. carded a final round 4-under 66 to finish tied for second alongside Garrick of Atherton, Calif. Team Canada’s Corey Conners of Listowel, Ont. finished at 5-under 277 in a tie for fourth with New Mexico’s Sam Saunders.