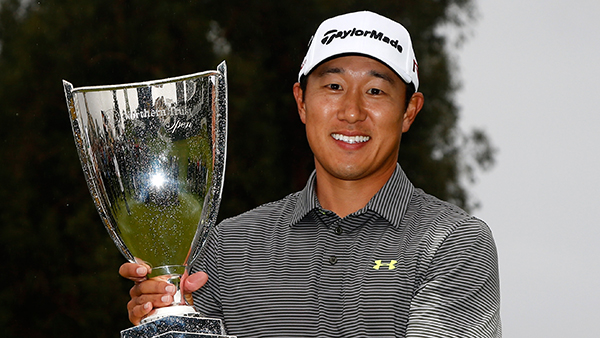 LOS ANGELES – Too nervous to look, too stunned to dance, James Hahn won the Northern Trust Open for his first PGA Tour title Sunday by holing a 25-foot birdie putt on the third extra hole at Riviera.

In a wild finish off Sunset Boulevard just as the Academy Awards was getting started, Hahn wound up with the trophy against a field of far bigger names to earn his first trip to the Masters.

He got up-and-down from behind the 18th green in regulation to save par for a 2-under 69. And that turned out to be good enough for a playoff when Dustin Johnson missed a 10-foot birdie putt for the win. Johnson closed with a 69.

Sergio Garcia finished bogey-bogey for a 71 to finish one shot out of the playoff. Jordan Spieth, thinking he needed birdie to get to 7 under for a playoff, nearly holed his aggressive chip on the 18th, and then missed the 6-foot par putt coming back. He shot 70 and missed the playoff by one, as did Keegan Bradley (68) and Hideki Matsuyama (67).

All three players made par on the 18th in the playoff, and then headed to the 10th hole, 310 yards of endless trouble. Casey was in the best shape just left of the green, hit a good chip to 15 feet and missed his putt.

Hahn and Johnson were in the rough behind the green and both hit daring flop shots over the back bunker that turned out perfectly. Hahn made his birdie from 10 feet, and Johnson matched him from 3 feet.

On the par-3 14th hole, Hahn pumped his fist when his 25-foot putt broke gently to the right and into the cup. He kept his head down when Johnson stood over his 12-foot birdie try to extend the playoff, looking up only when he heard the groans instead of a cheer.

“This is amazing,” Hahn said. “I never would have thought I would win this tournament.”

A shoe salesman as he tried to find his way in golf, Hahn was best known until now for his “Gangnam Style” celebration of his birdie two years ago on the 16th hole at the Phoenix Open.

Hahn is the first player from Cal to win on the PGA Tour. He still has 72 more wins to catch up with that other Golden Bear – Jack Nicklaus – though this was a great way to start.

He gets into his first World Golf Championship in two week at Doral, and he’s headed to the Masters.

Johnson, in his third tournament since returning from a six-month break to seek professional help for what he called “personal challenges,” made bogey with a wedge in his hand on the par-5 17th when he hit into a bunker, costing him a clear path toward winning.

Garcia let this one get away just as badly.

He had a one-shot lead playing the 17th and hooked his drive into the trees. Then, he blew his 50-foot putt from the fringe some 8 feet by the hole and missed the par putt. Tied for the lead, he pulled another tee shot into the left rough, came up short and chipped weakly to 25 feet for a bogey-bogey finish.

“I’ve always been truthful to myself and I didn’t deserve to win this week. It’s as simple as that,” Garcia said. “It caught up with my on the last six, seven holes. It was already a good effort for me to have a chance. Unfortunately, it’s never nice to finish bogey-bogey. But I can’t really be disappointed because I didn’t play well enough.”

Retief Goosen held on as long as he could until a horrid stretch on the back nine. The 46-year-old South African, going for his first victory in nearly six years, went from the trees on the left to the trees on the right and made double bogey on No. 13. He followed with two more bogeys. Only a pair of birdies at the end salvaged an otherwise miserable final round and he closed with a 75.

Everyone seemed to have a chance. Seven players had at least a share of the lead during the final round. That included Vijay Singh, who turned 52 on Sunday and was tied for the lead with a beautiful bunker shot to 10 feet on No. 10 for birdie. He didn’t made another birdie the rest of the way, fell back with a bogey on the 15th as the rain started to pound Riviera, and then taking double bogey on the par-3 16th. He shot 72.

Bae Sang-Moon also was tied for the lead until bogeys on the 11th and 12th holes. He closed with a 72 and tied for eighth.

Weyburn, Sask. product Graham DeLaet finished in a four-way tie for 8th following a final round 2-over 73. Adam Hadwin finished with a share of 22nd place at even par.