Jang goes from qualifier to leader at LPGA season opener 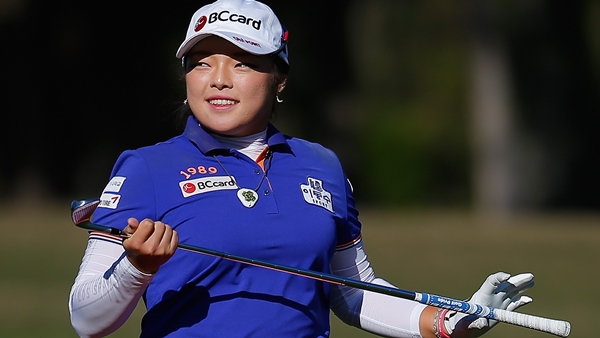 OCALA, Fla. – Ha Na Jang went from qualifier to leader in just a few days at the LPGA season opener.

And it surprised no one.

The 22-year-old South Korean, ranked 21st in the world, shot a 7-under 65 in the second round of the Coates Golf Championship on Thursday and opened up a four-shot lead over Stacy Lewis heading into the third round.

Jang has full status on the LPGA Tour. But because the opener isn’t a full-field event, she had to qualify last Saturday. Her extra time at Golden Golf & Ocala Equestrian Club certainly paid dividends. She made one bogey in two rounds, and responded to that miscue with birdies on two of the next three holes.

“I hope to play well these next two days so people get to know who I am,” Jang said through an interpreter.

The start of the second round was delayed 90 minutes because of frost, and the interruption prevented 50 players from completing 18 holes. They will return Friday morning to finish.

Jang might not want to wait to get back on the course. She sank a curl-in, 25-footer on her final hole in near-dark conditions to get to 12-under 132.

Although Jang is technically a rookie, she has plenty of experience. Her best LPGA finish was third in the 2014 Evian Championship last year. She also won six tournaments in five seasons on the KLPGA Tour and finished tied for 42nd at the Korean Women’s Open as a 12-year-old.

Lewis, one of three players to shoot 66 in the opening round, was 8 under heading into Friday’s third round.

“I just didn’t play quite as well today,” said Lewis, the first American since Betsy King in 1993 to sweep the Rolex player of the year award, the Vare Trophy and the money list title last season.

World No. 2 Lydia Ko and Azahara Munoz were five back at 7 under. So were Angela Stanford and Austin Ernst, but they had holes to finish.

“I was super rusty,” said Ko, who played with her left thumb taped. “For a moment, I didn’t even know if I would be able to play … I had zero feel. It’s kind of good that it’s back to normal. I tried to work hard in the three weeks I had to prepare for this.”

Much of the attention – the opener drew big crowds in horse country – was focused on players off the leaderboard.

Cheyenne Woods, the niece of Tiger Woods, likely made the cut. She birdied No. 18th to get to 4 over, which is expected to be safe. Woods is playing her first tournament with full-time status, although she got in on a sponsor’s exemption because she didn’t have enough priority to make the 120-player field.

“It’s definitely important for me to play well this week and get started off good,” Woods said.

Woods would be in much better shape if not for the par-4 13th, one of eight tribute holes at Golden Ocala. No. 13 resembles the 17th at St. Andrews, the Road Hole, and it’s gotten the best of Woods in two rounds. She’s 3 over on No. 13, including a double-bogey Thursday.

“That hole kicked my butt this week,” she said. “If I play it (Friday), I’m definitely going to get revenge on it.”

Paula Creamer had no trouble with the par-3 sixth, a replica of No. 16 at Augusta National. Using a 5-iron from 162 yards, Creamer notched her second ace in tour play.

It didn’t come with any bonus gifts, though.

Reigning U.S. Women’s Open champion Michelle Wie rebounded from even par in the first round with a 2-under 70 on Thursday.

“A lot of stupid mistakes,” Wie said. “But at the same time, you know, I just felt like it’s kind of good to get it out of the way. You make the mistakes and `OK, I’m not going to do that next time.’ … Just stupid errors here and there, but I’m excited for the weekend.”

Wie is a stroke back of Canada’s Alena Sharp. The Hamilton, Ont. native carded a 69 today and sits tied for 14th at 3-under.