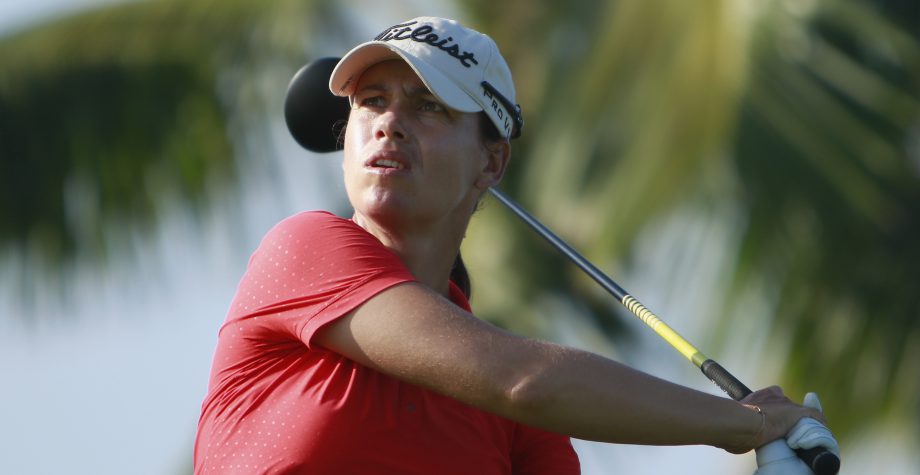 NAPLES, Fla. – Everyone in the CME Group Tour Championship is playing for something.

Lydia Ko and Inbee Park are playing to win the LPGA’s biggest season-ending awards. There’s a group playing for a $1 million bonus. Some are playing to build momentum for 2016.

And then there’s Karine Icher. She’s playing for France.

Icher – the lone French player in the 71-woman field – shot a 5-under 67 on Friday in the second round of the LPGA’s season-finale, giving her a 36-hole total of 138 that has her within four shots of the lead. Icher has friends who knew some of the 130 people killed last week in Paris, when extremists attacked a concert hall, a soccer stadium and cafes and restaurants.

“France is in a difficult time right now,” Icher said. “All we can do is just think of them, pray for them and that’s it. It’s really sad, but unfortunately I think it’s only the beginning and it’s really scary. Especially for us, we travel all over the world and it can happen anywhere, any time. It’s just like being in the wrong place at the wrong time, and you’re dead.”

South Korea’s Ha Na Jang shot 65 to get to 10-under 134 and hold the midpoint lead by two shots over world No. 1 Lydia Ko (67) of New Zealand. Americans Jennifer Song (69) and Cristie Kerr (69) were another shot off the pace, and Icher was in a group that also included Gerina Piller (70) and Brittany Lincicome (70) of the U.S. in a tie for fifth at 6 under.

Icher is from Chateauroux, about two hours south of Paris. She had visited some of the places that were targeted by the extremists, presumably members of the Islamic State group that has claimed responsibility for the attacks. Her husband was watching the France-Germany soccer match, which was taking place as the chaos began, on television.

Her friends and family, she said, are safe. Friends of friends were not so fortunate. And golf, she said, has been a needed sanctuary.

“When you’re on the golf course, you’re at work,” Icher said. “You try to forget everything else, you try to focus on your game and you’re 100 percent there.”

She’s 100 percent in the mix going into the weekend.

Jang leads the tournament, getting the top spot outright when Ko made double-bogey and bogey on consecutive holes late in her round. Still, Ko is in control of all the big year-end prizes that she’s chasing – like the LPGA’s scoring title, player of the year, a $1 million bonus for winning the “Race to CME Globe” and ensuring that she’ll finish the year with the No. 1 ranking.

For Inbee Park, who’s battling Ko for all those big prizes, there was progress. Even after closing with a three-putt bogey and lamenting her lack of luck on Bermuda greens, she still shot 69 for her best score at Tiburon since 2013.

Ko has the edge going into the weekend in their head-to-head contest, but Friday may give Park reason for hope.

“I know she played well yesterday as well,” Park said. “She seems like she really likes this golf course. I’ve got to start liking it a little bit more for tomorrow.”

Jang shot the round of the day, with eight birdies and one bogey. Minjee Lee shot 66 and Icher had one of four 67s, along with Ko, Japan’s Ai Miyazato and Danielle Kang of the U.S.

Icher isn’t planning to return to France anytime soon. It’s not because of the attacks, but simply that she and her family spend the offseason at their Orlando, Florida, home.

Still, it’s clear what a win would mean this week.

“It would be nice,” Icher said, “just for France.”