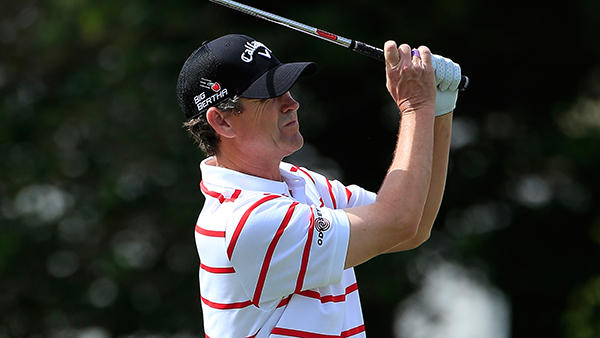 Janzen made the putt, then topped Bart Bryant in a playoff to win the ACE Group Classic on Sunday at TwinEagles Golf Club.

“I was like I have to make birdie here to get in a playoff, or I make a par and I don’t and I’ll just go back to the drawing board and work harder on my putting because I had some putts I could have made that would have made a difference,” Janzen said. “But there was a peace that to me it didn’t matter whether I won or not.”

Bryant fought his way back into contention when he shot a 10-under 62 Sunday, tying a course record while Janzen had a 5-under 67.

Both were 16 under in regulation play.

However, Bryant struggled in the playoff. After a short drive, he had 178 yards to go on the first playoff hole, No. 18. His second shot hit the railroad ties before bouncing back into the water.

“Well, honestly, where I messed up was my drive,” he said. “I kind of hit just a terrible little fade out there, so I lost 20, 30 yards. So now I have a longer yardage and shooting more across the water.

“Actually, the second shot I felt like I hit pretty good, I just left it a couple yards right. I thought I had enough, I thought I took enough club that even if I pushed it, I was going to carry the water.

“I think the wind had changed just a little bit from the first time played it and was just enough. So I hit a bad drive, caught a little bit of a bad lie, hit it a little right and it all equals in the water.”

Janzen, with 164 yards to go, put his approach shot on the green. He then two-putted for the victory.

“If I brought long into play and went left at all, it goes down left of the green and that’s an extremely hard chip, so I was very content to be short and left. I just had to be disciplined enough to aim it left at the front of the green and hit it there, so that’s what I did with a 7 iron.”

“I work on my game in a certain way so I’m going to do the best I can on every shot and I don’t need to worry about what people think, whether I hit a good shot or a bad shot,” Janzen said. “I used to have a terrible temper and threw clubs and carried on.

“That was really the breakthrough was to realize I was only doing that because I was too worried about what other people thought about my golf game, so I felt like I had to get mad to show them that I was better than that, which was just ridiculous.”

The tournament also was emotional for Bryant, who had to compose himself during a TV interview after he finished his 54th hole. His mother attended her first tournament since her husband died in May.

“I really thought about it at the beginning of the week how cool it would be if Brad or I could pull something off and just couldn’t quite get it done,” he said. “I hate to say it, there might have been a little bit when you get done and ready to go in a playoff, you don’t want to get emotional, you need to get tough and ready to go to a playoff. I think I lost a little bit of that, but I wouldn’t trade it for the world.”

Colin Montgomerie entered the day at 12 under and with a one-shot lead. He opened with a birdie but then alternated birdies and bogeys on Nos. 10-13. He also bogeyed No. 18 to fall into fifth place.

Esteban Toledo, who shot a 6-under 66 Sunday, finished third at 14 under.

Paul Goydos, the champion last week at The Allianz Championship, finished 7 under.

Bernhard Langer, who was at 7 under, withdrew from the tournament and returned home to Boca Raton to be with daughter Christina. She had back surgery five weeks earlier.

Stephen Ames emerged as the top Canadian, shooting 4-under 212 to tie for 10th place. Rod Spittle finished tied for 25th (3-under) while Jim Rutledge tied for 56th (3-over).