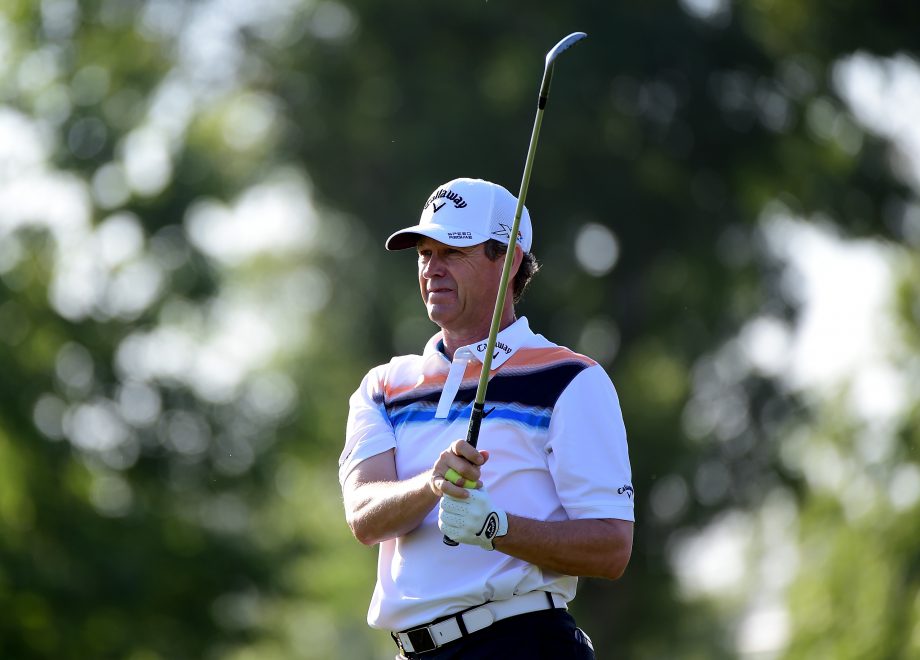 GLENVIEW, Ill. – Lee Janzen likes what he’s seen from his golf game lately even if it means not seeing much of his home.

Janzen birdied three straight holes Friday to close his front nine and went on to shoot a 7-under 65 at North Shore Country Club to share the first-round lead in the Encompass Championship with Fred Funk, David Frost and Brad Bryant.

Janzen qualified in New York on June 8 for the U.S. Open, then followed up his two rounds at Chambers Bay near Seattle with a sixth-place finish at the Constellation Senior Players Championship outside Boston. He played the next week in the U.S. Senior Open in Sacramento and flew to Washington, and now he’s in the Chicago area for another Champions Tour event.

“Fortunately, I feel like I’ve got a decent idea about what I’m doing with my golf swing, so I don’t have this urgency to go to the golf course and hit a lot of balls,” Janzen said.

Janzen started on the back nine Friday and birdied the 15th and 16th holes to get to 3 under. He missed the green on No. 17 but then chipped in for a birdie.

“I probably would have had a 6- to 8-footer for par coming back had it not gone in,” Janzen said. “I came out of that hole smelling a lot better than it looked.”

Janzen is still smarting from his failure to make the cut in the U.S. Open, which he blamed on two shots that led to a double and triple bogey.

“If I had just paid attention a little better on two irons shots and made a few putts, I feel like I would have had a chance to at least finish in the top 10,” he said.

Funk began the season bothered by a sore elbow and sat at home for three months before returning.

“I’m trying to hit the ball better and I’m able to play,” Funk said. “But I can’t swing the way I want to swing.

“The doctors told me I’ve got a bunch of tendons hanging on by threads, they say, on both sides – inside and outside. They said eventually it will just go away on its own … maybe.”

Both Funk and Bryant had stretches of four birdies in five holes on their back nine.

Funk’s bogey-free round was his best to start a tournament since the Champion Tour’s opening round of the 2014 season. He holed out from a greenside bunker at No. 5, his 14th hole.

“I played really solid today overall,” Funk said. “I gave myself some chances, but I actually had a couple little breaks, too.”

Bryant’s score was his best in any Champions Tour event since 2012.

“I did not expect too much warming up today,” he said. “I figured something out at the end of my warmup session, and on the golf course I hit it great. It came out of nowhere.

“It sort of felt like the old Brad today.”

Jerry Smith, Mike Goodes, Craig Stadler and Rod Spittle are a shot behind the leaders.