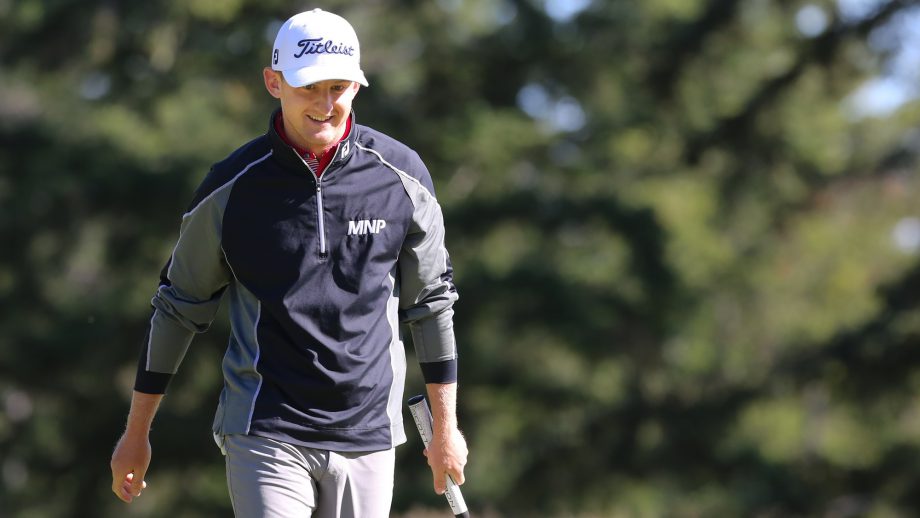 KELOWNA, B.C. — Playing in his second season on the Mackenzie Tour- PGA Tour Canada, Team Canada’s Jared du Toit fired a second-round 5-under 66 to grab the outright lead at the GolfBC Championship. Five players remain two back heading into the weekend.

In his back nine, du Toit made three consecutive birdies on Nos. 4-6, followed by a bogey on the seventh hole. He ended his round on a high-note, with an up-and-down birdie from the bunker on the par-5 ninth hole.

“Definitely happy to birdie the last there,” said du Toit. “It’s finally coming together. You hear it all the time, but if I just stick to it, I like my chances. I’m not surprised at all that I’m up there [on the leaderboard]. Hopefully in two more days, I can tell you the same.”

The Calgary native set the tournament record last year at this event with a 10-under 61 in the third round. Du Toit rose to prominence in 2016, when he played in the RBC Canadian Open as a 21-year-old amateur. He played in the final group with Brandt Snedeker and went on to finish in a tie-for-ninth. He was the low amateur and low Canadian at the PGA TOUR event.

Du Toit fellow Team Canada Young Pro Squad member Taylor Pendrith had a worldwind day. The Richmond Hill, Ont., talent carded a 8-under-63 to tie for the low round of the day with Jeremy Paul from Heidelberg, Germany. Pendrith climbed up 86 spots to sit tied for seventh after two rounds.

7 birdies, a double bogey and 2 eagles… it was a wild day for @TaylorPendrith who shoots 63 and is just 1 off the lead #Tourjectory pic.twitter.com/kHrMb7j6Kl

After picking up the 18-hole co-lead Thursday at the GolfBC Championship, Mark Anguiano and Zach Wright are two back of du Toit with three others, at 9-under 133. They both followed up their 9-under 62s in the opening round with second-round, even-par 71s.

Wright carded three birdies and three bogeys in his up-and-down round. Reflecting on his day, the 24-year-old was most disappointed with his putting.

“I couldn’t get anything going,” said Wright. “On the front nine, I didn’t make that many putts. I couldn’t get my putter going at all. I kept grinding, and nothing kept going in, so I just fell apart at the end and made bogeys.”

Wright held the 36-hole lead by two shots last week at the Bayview Place DCBank Open but went on to tie for sixth after a third-round 73. The Louisiana State University alum entered this week No. 3 on the Order of Merit.

Anguiano of Bellflower, Calif., carded four birdies and four bogeys during his second-round play. His back nine included three consecutive bogeys, on Nos. 10-12, before closing with a birdie on the 17th hole. Playing in the afternoon wave, the 25-year-old faced heavier rain and wind compared to the players who teed off in the morning, but the California State University-Fullerton alum chose to focus on the positives.

“It was pretty up and down today,” said Anguiano. “I had a stretch in the beginning of the back nine that really stung, but I was really happy with the way I bounced back mentally. Even though I made only one birdie coming in, I gave myself a lot of looks. I’m still happy with where I am.”

Among the 21 Canadians in the field, six players advanced to the weekend. In addition to du Toit and Pendrith, David Rose (West Vancouver, B.C.), Team Canada Young Pro Squad’s Stuart Macdonald (Vancouver, B.C.), James Seymour (Aurora, Ont.) and Ryan Williams (Vancouver, B.C.) made the cut to head into round three.