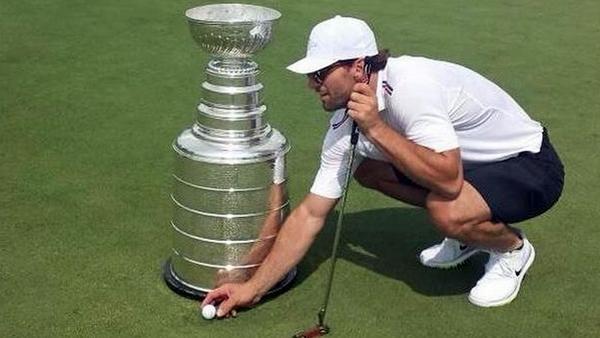 You may use a lucky coin as your ball marker.  Jarrett Stoll has you 1-up… He uses the Stanley Cup.

Stoll, a two-time Stanley Cup champion, won hockey’s most coveted championship in 2012 and 2014 as a member of the L.A. Kings.

This past weekend the Melville, Sask. native brought Lord Stanley’s Cup to a local Saskatchewan golf course, where he used it as a tee and ball marker. Enjoy! I bet he did.

Jarrett Stoll getting ready for a round of Golf with #stanleycup @HockeyHallFame @NHL @lakingspr # HNIC pic.twitter.com/ptK7NmyhE5

Earlier this summer, Stoll and the L.A. Kings celebrated their latest cup win with a trip to an Los Angeles beach. Stoll brought his girlfriend, TV celebrity and sportscaster Erin Andrews, to the celebration.