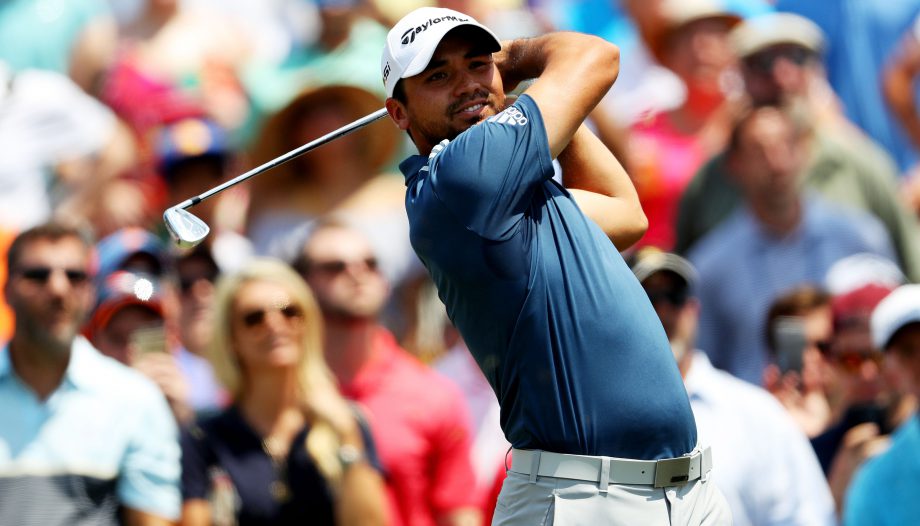 PONTE VEDRA BEACH, Fla. – The sky was getting so dark that Jason Day could barely see the flag on the 14th hole, much less the small crowd that waited out a two-hour storm delay Friday at The Players Championship. The way he was playing, he sure could hear them.

His 5-iron from 190 yards into a strengthening wind rolled to the back of the green and settled 2 feet away.

“A great shot,” said Day, who can be stingy with self-praise.

His second big birdie to end his long day stretched his lead to three shots before it was too dark to continue, and Day stepped into a van for a short drive to the clubhouse. His first task was to check the wind for the morning when he had to finish four holes.

He already was 14-under par. He was on a record-setting pace at the TPC Sawgrass. And he could only think about pushing.

“I’m at 14-under par, I’ve got a good lead going on, I just can’t sit back,” Day said. “I need to keep pushing forward. And the moment that I lose a little bit of focus and make a few mental errors and mistakes, that’s when I let the field back in. And I just can’t afford to do that.”

Shane Lowry had a 68 and was at 11-under 133, a solid round that only got going when he hit a wedge so badly that it didn’t each reach the island green at the par-3 17th. He managed to escape with bogey, and then holed a wedge from about 180 yards on the 18th hole for eagle.

Two tough pars at the end of his round meant he was likely to be in the final group with Day. Not bad for a guy who was hitting it so badly Wednesday that he was dreading the thought of even playing.

Jordan Spieth was just hopeful of a Saturday tee time, as was Phil Mickelson.

Spieth, looking frustrated as ever, got to the projected cut of 2 under with back-to-back birdies to start the back nine, only to catch a bad break when a rake kept his ball from rolling into the bunker and stayed on the steep slope leading to the sand. The best he could do was chip over the green and he made bogey, and his tee shot was wild to the right on the 15th when they stopped because of darkness. Spieth was at 1 under.

Defending champion Rickie Fowler shot 71 and was at 1-under 143. He needed help to make the cut.

Greg Norman set the 36-hole record of 14-under 130 at The Players in 1994, the year the Shark made only one bogey the entire week. Day looks just as good and has yet to drop a shot over the 32 holes he has played. He ended his day with a 40-foot birdie putt down the slope at No. 13 and the 5-iron for his tap-in birdie at the 14th.

“Hopefully, I can hit some good, solid shots coming in and at least try to get a couple more birdies,” Day said.

Another day of calm and soft greens in the morning led to more record-tying performances, and a few irritated golfers who could have gone even lower. Colt Knost made a 15-foot birdie putt on the 17th to reach 10 under, only to three-putt the 18th and have to settle for a course record-tying 63.

“I was a little nervous over the second one,” Knost said about his 5-footer for par and a 62. “I knew what it was for. But I didn’t hit a bad putt. I hit it on the left lip and it just stayed there. So a little disappointing, but still, I would have taken 9 under before I started today.”

Then came Rory McIlroy, 7 under through seven holes when he made a 50-foot eagle putt from just off the 16th green. His momentum slowed, but he still came to the par-5 ninth needing a birdie to become the first player to shoot 62 on the Stadium Course at Sawgrass.

McIlroy opted to lay up from 271 yards because going for the green historically has not worked out well for him on No. 9. Laying up wasn’t much better. He chunked a wedge, chunked a chip and made bogey for a 64.

“I wanted to make birdie and shoot 62,” he said. “So yeah, I’m disappointed, but there’s still two more days to go. That’s the nice thing. I’m in good position heading into the weekend. … Hopefully, I’m not too far behind.”

Even with a storm delay, there was no shortage of excitement.

The biggest thrill belonged to Will Wilcox, who hit pitching wedge for a hole-in-one on the island-green 17th. It was the first ace on that hole in 14 years.

Abbotsford, B.C., native Adam Hadwin tops the Canadian contingent at 4-under to sit T48. David Hearn from Brantford, Ont., matched his opening round of 71 and is T65. Nick Taylor, also from Abbotsford, B.C., and Weyburn, Sask., product Graham DeLaet are 2-over and 3-over, respectively.