Jason Day tweaks back in victory at Match Play 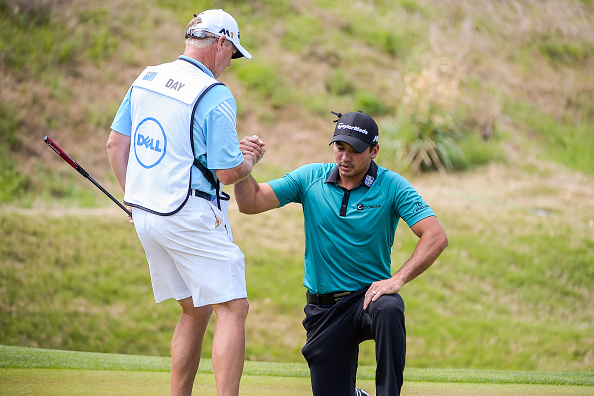 Now he has to overcome a bad back.

In the latest in a series of injuries for Day, he was reaching for his back on the 15th hole and then winced and grabbed it after a tee shot on the 16th hole. He took a knee on the green, where he closed out Graeme McDowell, 3 and 2.

Day headed straight for the fitness trailer for treatment.

The severity of the injury was unclear. Day left without speaking to reporters, and his agent later sent a statement that he tweaked his back, had some work done on it, was pleased with winning and is getting prepared to play Thursday.”

Day told the Australian Associated Press before getting treatment, “It’s really hard to play with searing pain in both sides of your lower back. Just my back has seized up and I need to get inside right away for treatment and see what’s wrong.”

Top-seeded Jordan Spieth, the crowd favorite at Austin Country Club who helped Texas to a national title in 2012, had the largest crowd and delivered a solid performance. Spieth was 4 up through seven holes, and outlasted Jamie Donaldson, 3 and 2.

“I felt like everybody was on our side today,” Spieth said. “I almost felt like a home Ryder Cup match. And Jamie, I’m not sure what he would say about it. … Everyone was very respectful, but every single step I took, somebody was yelling at you, ‘Hook ‘Em Horns’ or ‘Go Jordan, we’re rooting for you.’ Which is really, really cool.”

Rory McIlroy had three close calls on his way to victory last year at Harding Park. He started out with one in Texas. McIlroy never led until he won the 18th hole with a par. Thorbjorn Olesen missed a 3-foot putt on the 16th, and with the match all square on the 18th, the Dane shanked a chip to hand McIlroy the match.

“Match play is all about just getting through,” McIlroy said.

Rickie Fowler, the No. 5 seed, failed to do that. He rallied from 3 down on the back nine to square his match on the 15th hole, only for Jason Dufner to win the next two holes with birdies to beat him on the 17th hole.

Dustin Johnson (No. 8) lost to Robert Streb, and Hideki Matsuyama (No. 12) lost to Rafa Cabrera-Bello. Adam Scott (No. 6), who has lost seven straight matches in this event, had to settle for a halve with Thomas Pieters of Belgium. Players and caddies wore black ribbons in their caps to honor the victim of Tuesday’s bombings in Brussels.

In the round-robin format, all of the players still have a chance to advance from their groups and reach the knockout stage. A year ago, only three players who lost in the first round managed to reach the round of 16. It might be easier this year because there are halves during group play.

Phil Mickelson, playing this World Golf Championship for the first time in five years, ran off three birdies in a four-hole stretch on the front nine to build a big lead and Matthew Fitzpatrick couldn’t catch up. The match ended on the 14th hole. Matt Kuchar had the shortest match, a 6-and-5 victory over Anirban Lahiri, who flew to Texas from a runner-up finish in India.

Most of the drama on a windy day involved Day, who was coming off a victory Sunday in the Arnold Palmer Invitational.

Day’s career has been filled with injuries. He withdrew after one round in the 2012 Masters with an ankle injury. A wrist and thumb injury kept him out for much of the spring in 2014 after he won the Match Play. He suffered vertigo symptoms at the U.S. Open last year. He took three months off at the end of last year to be with his wife when she gave birth to their second child and to concentrate on his health.

The back pain grabbed when the match was in hand.

Day lost two straight holes early in the match, including the par-3 third when he came up well short of the green and into a hazard. But he kept smashing tee shots and converting them into birdies, ending the back nine with two birdies for a 1-up lead. McDowell found the water on the 11th, and Day went 3 up through 13.

Lacking on a warm, blustery day were the number of great shots typically seen in match play. Part of that was Austin Country Club, unknown to just about everyone except for Spieth and Dufner, whose coach lives in Austin.

“I think everybody is kind of feeling out how it’s going to be this week,” Dufner said.