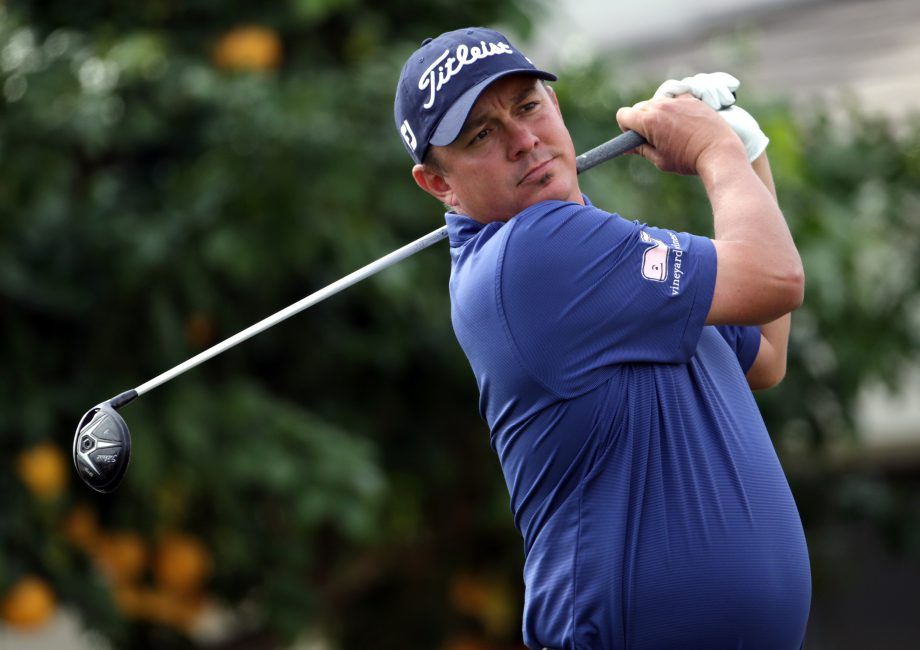 “I probably played each four or five times before that Q-school started,” Dufner said. “I played unbelievable. I think I shot 24 or 25 under for the six rounds. And to be honest with you, this is kind of where everything started for me, because then in 2009 I had a really nice season. That’s kind of when I started playing some good golf. He thought back to that experience Friday in the CareerBuilder Challenge when he shot a 7-under 65 on the Stadium Course to take a one-stroke lead over Jamie Lovemark.

“I remember a lot of the shots and how the course played,” Dufner said.

The Pete Dye-designed Stadium Course is back in the event rotation after being dumped following its debut in 1987, and the Nicklaus Tournament Course is being used for the first time. They got in when the Palmer and Nicklaus private layouts dropped out.

The Stadium Course has mellowed over the years and equipment technology has helped tame it – a bit.

“It’s a difficult golf course,” Dufner said. “There’s a little bit of room to play off the tee, but if you get off the path a little bit, you can get into some trouble. He’s (Dye’s) got some water out there. He’s got some tricky bunkers. You get some uneven lies here and there. … It’s definitely the most difficult of the courses we have played here.”

Dufner parred the final four holes, escaping trouble on the par-5 16th after his drive strayed to the left. The 2013 PGA Championship winner played the front nine in 6-under 30, bogeyed the 10th after hitting into the greenside water, and added birdies on 12 and 14. He was forced to lay up on all four par-5 holes and took advantage of many short approach shots.

“Any time I’m inside of 130 yards I feel pretty good,” Dufner said. “I had some really good numbers with my wedges, which helps. I wasn’t in between on too many of them.”

Dufner’s drive on 16 perched on a ledge of dormant grass above one of the deep bunkers that line the left side. The ball at knee level, he slashed it 100 yards down the fairway before slipping to his hands and knees on the steep bank.

“I thought I would have a good go at that green in two and maybe get another birdie or possibly even an eagle and walked away with a 5, but no damage done,” Dufner said.

Dufner had a 15-under 129 total. He opened with a 64 on Thursday on the Nicklaus Course, will play La Quinta on Saturday, and return to the Stadium Course for the final round Sunday.

Lovemark had a 65 on the Nicklaus Course. He holed out from 105 yards for eagle on the par-4 first, his 10th hole of the day.

“Got a little tired coming down the stretch,” Lovemark said. “There’s some long rounds out here.”

Defending champion Bill Haas was three strokes back along with Jason Gore, Anirban Lahiri, Andrew Loupe and Adam Hadwin. Haas shot 66, Gore 64, and Lahiri 68, all at the Nicklaus Course. Loupe had a 66 on the Stadium Course, and Hadwin a 66 at La Quinta.

Phil Mickelson was 11 under in his first start since the Presidents Cup in October and first since splitting with swing coach Butch Harmon to work with Andrew Getson. The 45-year-old Mickelson had a 65 on the Nicklaus Course.

“I’m probably a week away, if I’m being honest,” Mickelson said. “But I’ve also won with a lot less game than I have right now. I still expect to get in contention and have a good weekend, but a lot of iron shots are 12, 15 feet off.”

Dufner has tied for ninth in his last two PGA Tour starts, at the RSM Classic in November and the Sony Open last week in Hawaii. In between, he teamed with Brandt Snedeker to win the Franklin Templeton Shootout.