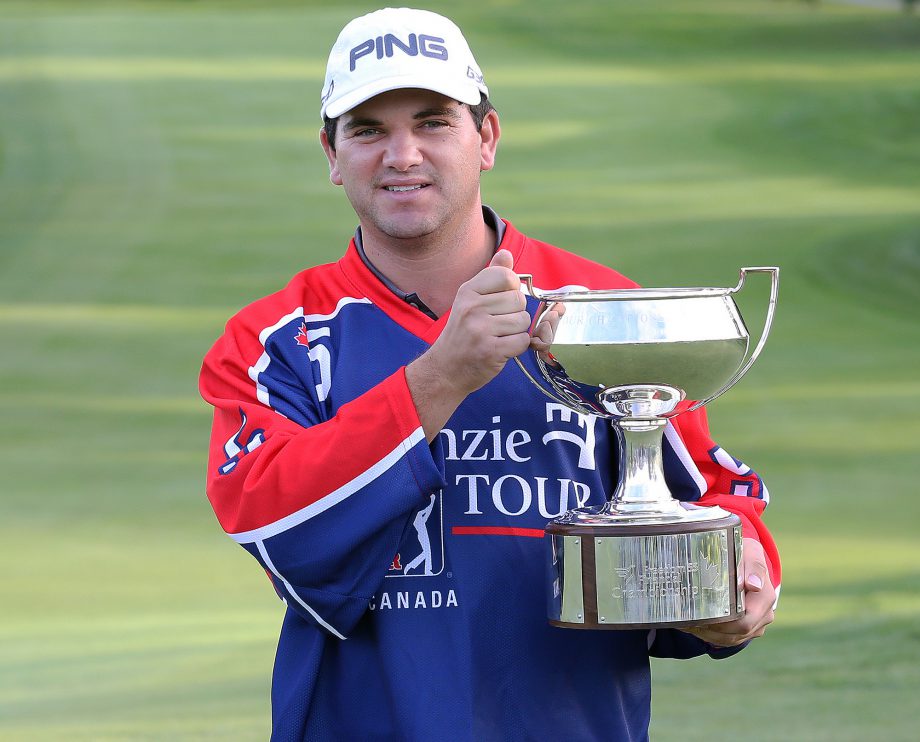 After sleeping on the 36- and 54-hole leads, Jason Millard of Murfreesboro, Tennessee posted a final-round 68 and outlasted Ryan Williams of Vancouver, British Columbia in a playoff to win the Freedom 55 Financial Championship, the final event on the 2015 Mackenzie Tour – PGA TOUR Canada schedule. With the win and a first-place check of $36,000, Millard jumped from No. 30 to No. 5 in the final Order of Merit to earn status on the Web.com Tour for the 2016 season.

Taylor Pendrith of Richmond Hill, Ontario, finished T8 to clinch Freedom 55 Financial Canadian Player of the Year honors which comes with a $25,000 prize.

Millard, who had missed three of four cuts heading into the week, rebounded nicely with four rounds in the 60s including a second-round 7-under-par 63. Millard and Williams went back and forth most of the final round, with the two drawing even at 15-under-par after a Williams bogey on the 17th hole. After both made pars on the 18th hole in regulation, the duo played two sudden-death playoff holes, both on No. 18. After matching pars on the first hole, Millard converted a two-putt par from 15 feet while Williams was unable to get up-and-down from the front of the green, missing a par putt from 10 feet that would have extended the playoff.

“I kept hitting driver in the playoff on 18 to take the trees out of play on the right,” Millard said. “The pin was on the left and it gave me a lot of green to work with. That’s how I’ve been playing it all week and it paid off on the second playoff hole.”

As for the bonus of earning Web.com Tour status by finishing fifth in the Order of Merit, Millard said his position heading into the week helped him relax.

“I was 30th (on the Order of Merit) coming into the week, so I felt like I had no pressure compared to the guys in the top five or the top 10, I was just trying to have a good week,” he said.  “Earning Web.com Tour status is what we play for all year long and the fact I’ll be able to play on that tour next year feels great. Honestly, I don’t think it has hit me yet, I’m sure it will sink in on the drive home.”

Williams was foiled in his bid to win back-to-back Freedom 55 Financial Championships, having captured last year’s event down the road at Sunningdale Golf & Country Club.

“I’m really proud of myself, I put myself in position to win,” Williams said. “It’s been an up-and-down year, but coming into the last event, as defending champion, and have a chance to win in a playoff is pretty satisfying. I have to credit Jason, who played great all week.”

Pendrith, the Freedom 55 Financial Canadian Player of the Year, had five top-10 finishes in 2015, including three playoff losses. He graduates to the Web.com Tour after finishing third in the Order of Merit with $60,736, $5,969 ahead of Albin Choi of Toronto, Ontario.

“This was our third year presenting the Freedom 55 Financial Championship, and we’re fortunate to be working with a partner like the Mackenzie Tour who have given so many aspiring young players an opportunity to move on to PGA TOUR success,” said Mike Cunneen, Senior Vice-President, Freedom 55 Financial. “As a Canadian organization that believes in inspiring freedom and confidence for the future, it was a privilege to recognize young Canadian golfers on the Tour with the Freedom 55 Financial Canadian Player Award, and help them achieve their goals and dreams. We look forward to doing this again next year.”

“We’re thrilled to see Taylor put on a great performance this season to be named Freedom 55 Financial Canadian Player of the Year,” said Mackenzie Tour President Jeff Monday. “Our thanks and gratitude go out to Freedom 55 Financial for all their support of our Tour, including these awards. Thanks to them, some of our best and brightest players are able to take a big step forward in achieving their goals and dreams.”

“I’m thrilled to be the Freedom 55 Financial Player of the Year and finish in The Five,” said Pendrith. “While today didn’t go the way I wanted, it was nice to close out the season accomplishing some of the goals I set for myself at the beginning of the year. While I wasn’t able to win, I gave myself a lot of confidence by putting myself in that position on a consistent basis.”

“I kind of blacked out there on the back nine, hitting it close and making putts. That’s definitely the best I’ve ever played in a golf tournament, especially on this golf course. It was a lot of fun. It’s a great golf course, it’s short but it makes you pay attention on every shot you hit.” – Curtis Reed on his bid for 59, which ended one shot short in a 10-under 60.