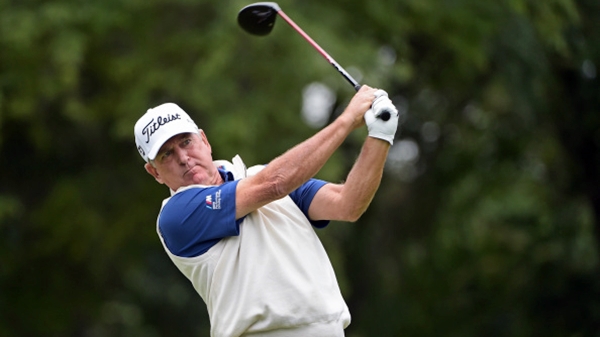 SCOTTSDALE, Ariz. – Jay Haas birdied four of the last six holes Friday for an 8-under 62 and a four-stroke lead in the Champions Tour’s season-ending Charles Schwab Cup Championship.

“I thought much harder today than yesterday,” said the 60-year-old Haas, the oldest player in field limited to the top 30 players on the money list. “The wind was difficult, the greens are still very firm. I honestly said if somebody was giving me even par before I played, I would have said, `OK, that sounds pretty good, I’ll take that.’ But I played extremely well.”

Haas had his 38th straight round of par or better to break Loren Roberts’ tour record.

“It was a pretty error-free round,” Haas said. “Disappointed that I didn’t birdie at least the last hole or at least get kind of an opportunity to shoot my age today, but it was a special round. Hit a lot of good shots and didn’t make a lot of long putts. They were all, you know, 15 feet and in probably for birdie. So it was solid golf today. I don’t know what got into me, but it was a lot of fun.”

Haas won two weeks ago in North Carolina to become the 18th player to win a Champions Tour event at 60 or older. He has 17 victories on the 50-and-over tour after winning nine times on the PGA Tour.

First-round leader Tom Pernice Jr. was second after a 67.

“I played pretty well,” Pernice said. “The conditions were obviously a little more difficult with a little bit more breeze blowing today, so it was a little bit trickier. I struggled a little bit on the speed of the greens, I left several putts short.”

Kenny Perry was third at 6 under after a 68.

Fred Couples, the winner last year at TPC Harding Park in San Francisco, was 5 under along with Michael Allen and Olin Browne. Couples shot 64, Allen 66, and Browne 67.

“I haven’t putted like this or made this many putts in a long time,” Couples said. “But I didn’t hit the ball so bad on the front nine, shot even par and I got it going, and as you saw, some of these putts are crazy. Just one of those things. … I might go dressed as a putter tonight for Halloween.”

Allen won the AT&T Championship last week in San Antonio for his second victory of the year.

“My God, it’s a war of attrition out here,” Allen said. “But overall, it was a fun day. I played well and kind of hung in there.”

Bernhard Langer was tied for seventh at 4 under after a 70. Langer won the Charles Schwab Cup points title last week, has a tour-high five victories – two of them majors – and also has wrapped up the season money title with $2,916,189.