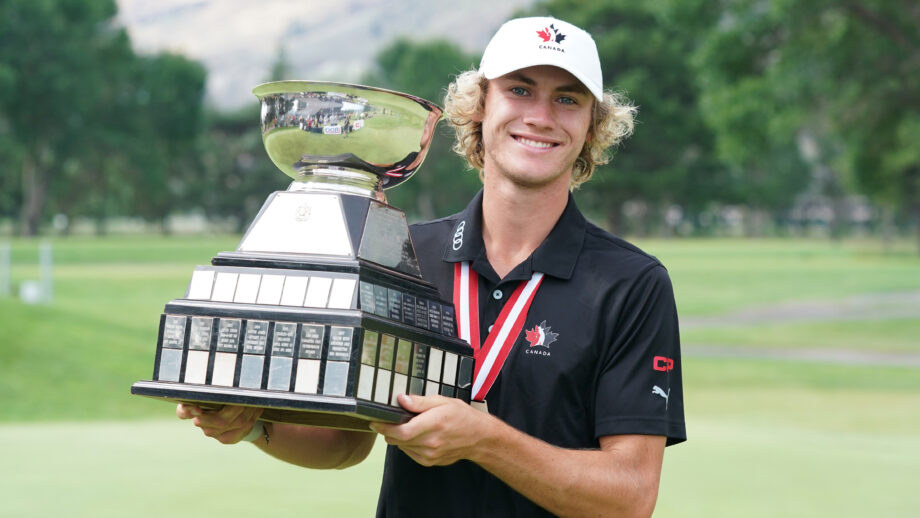 Prior to today, there were only seven players who could boast back-to-back Canadian Junior Boys Championship titles. Now, Jean-Philippe Parr from St-Célestin, Qué. adds his name to the list as the eighth.

During the week at Rivershore Estates and Golf Links, the weather reached upwards of 40 degrees. Hot, but not as hot as JP’s putter. The 18-year-old University of Tennessee commit fired a final round of 3-under-par 69 today to clinch his victory, finishing three shots ahead of the competition.

“It’s always been a tournament I’ve wanted to win so to go back-to-back is really cool,” said Parr of the consecutive titles. “It was a lot of fun to play with all of the Team Canada guys. It’s great to have fun too.”

The back-to-back title and a spot on the Silver Cup with his name on it aren’t the only avenues in which Parr has etched his name into Canadian golf history this week. On Monday, JP shot a second round of 62 which tied the low Canadian Junior Boys Championship single-scoring record set by Calvin Ross in 2017 and matched by Christopher Vandette in 2019.

“Obviously my second round was really cool, but then today I hit a really good shot on eleven and it just really gave me a good confidence boost to finish the round,” the Team Canada National Junior Squad member noted of his memorable tournament moments.

Parr’s name is in good company on the Canadian Junior Boys trophy. He adds his handle to a list of notable previous champions including PGA TOUR player Nick Taylor (2006) and Canadian Golf Hall of Fame member George Knudson (1955).

Andre Zhu also secured the title in the 16-and-under Juvenile Boys Division with a score of 272 for the tournament. Matthew Javier, who landed an impressive chip shot on 18 for eagle finished two strokes back of Zhu’s lead.