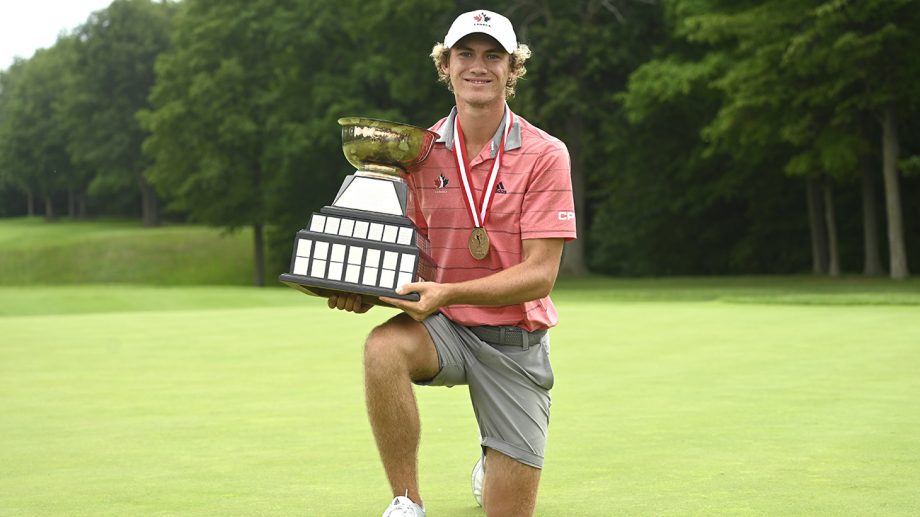 The 17-year-old Team Canada National Junior Squad member jumped into the lead by one stroke after Wednesday’s third round following a bogey-free 66 that included an eagle on the second hole.

The final pairing saw Parr chased by duo Cooper Humphreys (Vernon, B.C.) and fellow Junior Squad member Owen Mullen (Shortts Lake, N.S.), both who started the day one back. It came down to the wire with Mullen’s par attempt falling just short on the final hole—avoiding the need for a playoff.

Parr said the key to his final-round success was staying patient and bouncing back from bad shots.

Humphreys, 16, won the Juvenile Boys division (ages 16 and under) by a convincing 13-strokes—the largest margin of victory since 2011 (Kevin Kwon).

“I just wanted to shoot as low as I could, stay patient, hit the middle of the greens, make some putts and try my best,” said Humphreys, who plays out of Harvest Golf Club in Kelowna, B.C.

Parr’s resume includes victories at the Quebec Junior and Juvenile Boys Championship in 2020 and both the AJGA Junior at Southpointe and the Future Links Fall Series East in 2019.

Ben MacLean of Niagara Falls, Ont., and Jeevan Sihota of Victoria, B.C., rounded out the top five in a tie for fourth place at 1 under.

The 2022 Canadian Junior Boys Championship will be held at Rivershore Golf Links in Kamloops, B.C.