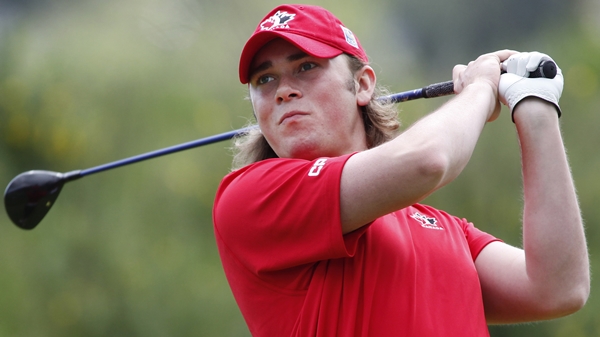 BIRMINGHAM, Ala. – Jeff Maggert experienced the potential ups and downs of Shoal Creek during a round that was still good enough to put him on top.

Maggert birdied three of the final four holes Thursday for a 5-under 67 and a one-stroke lead over Kevin Sutherland at the Regions Tradition.

He held onto the lead at the first of the Champions Tour’s five majors despite a bogey on No. 18. He said a hot start is nice, but patience will be important the rest of the week on a course where Kenny Perry won at 7 under last year.

“The difficulty of the course, you don’t have to come out and tear it up for four days,” Maggert said. “You know there’s going to be some rough times on the course. Just the history of the tournament here, I think 10 to 15 under’s probably a typical range you would like to be in on Sunday.

“A few more 5 unders would help a lot in that regard.”

Maggert is seeking his second win on the 50-and-over tour after a victory in Mississippi last year. Sutherland is chasing his first senior title.

Maggert had five birdies on the first nine holes before the roller-coaster finish. He had three bogeys and three birdies on the back nine, but did make a 20-footer for birdie from the fringe on No. 16.

Tom Watson, Colin Montgomerie and Wes Short Jr. were two strokes back at 69.

Sutherland had six birdies and two bogeys before parring the final five holes. It’s his first time playing Shoal Creek since the U.S. Amateur in 1986 and, he said, “I didn’t remember much except for the fact that I did like it.”

“Any time you make six birdies, I don’t care where you’re playing, that’s a good day,” said Sutherland, who made a 20-foot birdie putt on No. 9.

“Kevin’s been playing pretty good this year so it’s not surprising that he had a good round,” Maggert said. “But it’s a ball-striker’s course. You can’t just aim for the middle of the green and shoot a good score.

“You’ve got to pay attention to where the pins are on the greens.”

The 65-year-old Watson had to chip out of the bunker below the green on the final hole, saving par with a 12-footer.

“It makes dinner taste a lot better, it always does,” he said. “I made a stupid decision on 18 to go for the flag there. It’s not a flag that you go at. You go left of the flag, get your two putts out of there and get out of there with a par.

“I did a pretty stupid shot right there. I was trying to go right at it. Ego got involved again.”

Then again, he made a 50-foot putt for birdie on No. 4, “so that’s like stealing.” It’s Watson’s best opening round at the tournament since 2009, when he also had a 67 at Sunriver Resort in Oregon. He finished in a three-way tie for fifth.

Montgomerie had a closing birdie. Short finished with a bogey with a chance to catch up to Sutherland and perhaps Maggert. Short had two straight birdies going into 18.

Perry and David Frost, who both have won this tournament since it moved to Shoal Creek in 2011, were among nine players at 2 under.

Canada’s Rod Spittle opened with a 74 and had a share of 43rd.