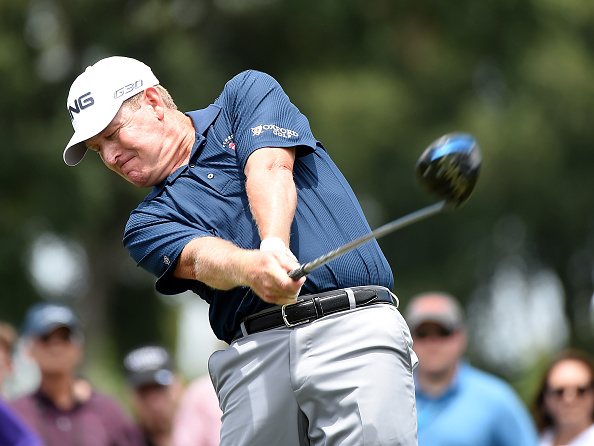 Maggert won the U.S. Senior Open on Sunday for his second major victory on the Champions Tour this year. He closed with a 5-under 65 at sun-drenched Del Paso Country Club, edging defending champion Colin Montgomerie by two strokes.

The victory makes Maggert more than just a repeat winner on the 50-and-over tour. Along with Montgomerie (three) and Bernhard Langer (three), the three have combined to win the last eight majors.

“It’s satisfying just because the guys out here on the Champions Tour are the same guys that I was trying to beat 20 years ago,” Maggert said.

The 51-year-old American won his first senior major last month in Alabama in the Regions Tradition. His only other Champions Tour victory came in Mississippi last year.

Maggert had just three wins in more than 20 years on the PGA Tour, the last in the 2006 St. Jude Classic. Now he has matched that total in a little more than a year on the Champions Tour.

“I had a lot of good runs in the U.S. Open over the years and probably lacked a little maturity to pull it off,” he said. “But certainly, now that I’m an old guy, I’ve learned a lot and was able to just steady myself and play well.”

Maggert made six birdies and one bogey to finish at 10-under 270. He took home $675,000, a gold medal, a silver trophy and an exemption into next year’s U.S. Open at Oakmont.

Montgomerie closed with a 66. Grant Waite and Langer tied for third at 7 under. Waite had a 67, and Langer, who shared the lead with Maggert after three rounds, shot a 68.

But nobody could shake Maggert, who provided a little bit of drama to a final round that lacked it when his approach on the 18th landed in the upslope of the greenside bunker. He wedged out and made the 4-foot par putt, raising his arms in celebration.

Maggert embraced wife Michelle and their 10-year-old children, twins Madeline and Jake, who came running onto the green – with Madeline leaping into his arms.

His family had taken an early morning flight from South Carolina and showed up on the practice range before Maggert began his round. They had missed his other victories on the Champions Tour and didn’t want to miss another.

“It was a little bit of an extra, `Hey, they came all the way here. Don’t screw this up,” Maggert said, chuckling.

After three days that ended with bunched leaderboards, Maggert made three birdies to start his round to quickly pull away. He hit 12 of 13 fairways and consistently hit greens in regulation.

Maggert also drove the green on the 282-yard, par-4 ninth, then converted a birdie putt to move to 9 under. He stuck his tee shot within 5 feet on the par-3 14th before converting another birdie. And he just about sealed his victory by driving the par-5, 550-yard 15th in two, then two-putted for a three-shot lead.

“He was in beautiful rhythm, and he drove the ball magnificent,” Langer said. “If you can drive the ball well, you set yourself up. He hit good iron shots on top of that.”

Maggert bogeyed the 16th but stayed out of trouble from there to make sure nobody could catch him from the clubhouse.

The 52-year-old Montgomerie, who was trying to become the first back-to-back winner at the U.S. Senior Open since Allen Doyle in 2005 and 2006, put a little pressure on the leader late. He ended a bogey-free round with a birdie putt from about 25 feet on the 18th, walking off the green to roars with pairing partner Tom Watson, who also finished with a long birdie putt.

Montgomerie, who tied for 64th at the U.S. Open at Chambers Bay last week, was taking an overnight flight to London – via Los Angeles – to try and qualify for next month’s British Open at St. Andrews. He said he did all he could to win in Sacramento, but Maggert was just better this time.

“To come here tired, very tired, and to put a good performance up, it’s always nice when you are defending a title, to defend it properly,” Montgomerie said. “I did more than that. I nearly got it here.”

Watson missed his chance to carve his place as the oldest winner of a senior major at age 65. He started one off the lead but was never a factor, shooting a 69 to tie for seventh at 5 under.

Billy Andrade (63) and Lee Janzen (64) shot the lowest scores of the day to close at 6 under. Andrade finished one stroke shy of Loren Roberts’ record for the lowest 18-hole score in any USGA Open championship.